11-year-old Indian girl has set a World Record by performing ‘Niralamba Chakrasan’ 21 times in a minute! 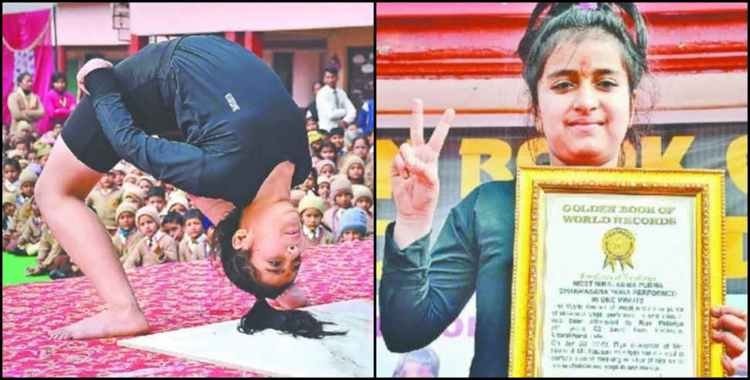 “Give a girl the right shoes, and she can conquer the world.”

This Women’s Day, we bring forward to you, the laudable triumph of an 11-year-old girl, who has set a World record earlier this January.

Riya Paladia, a young girl hailing from Gaulapar village in Uttarakhand, has secured a page for herself in the ‘Golden Book of World Records’ with her incredible act of carrying out ‘Niralamba Chakrasan’ for 21 times in a span of just 60 seconds!  Breaking the previous record in the name of Khushi (who did Niralamba Chakrasan 15 times in a minute), Riya has set the bar very high this time.

The mind-blowing act took place at the Vendy Senior Secondary School in Haldwani on 20 January, under the supervision of Alok Kumar, National Head of the Golden Book of World Records. He presented her a provisional certificate amid cheering crowd, announcing her accomplishment.

Riya Paladia, who comes on stage after the resplendent traditional performances, stunned the onlookers by executing the most strenuous and toughest Aasan (Yoga contortion) with ease! Niralamba Chakrasan is said to be a challenge even to the avid yoga practitioners, who struggle to pull off the contortion that involves sliding to the ground on the back from a standing position and rising up again to the previous state, all without the support of hands! It surely requires intense focus and magical flexibility while maneuvering the body!

Riya, a passionate gymnastic and yoga practitioner, has given credit for her success to her mother Hema Paladia, father Naveen Paladia, and coach Amit Saxena. She also stated that she aims to bag the Gold Medal in the prestigious Olympic Games.

Her parents, who were found teary-eyed, said that they were brimming with pride in her daughter’s remarkable achievement, which they believe is inevitable, owing to her firm dedication. They also said that their young daughter travels around 15 km a day to manage studies and training simultaneously. Amit Saxena, her trainer, is quoted as saying, “I’m very happy about her achievement and that it was not really difficult for her as she was always fond of gymnastics and yoga.”

As they say ‘The Sky is the limit,’ she is now focusing on multiplying her efforts to achieve her goal of an Olympic medal. We wish that she shines as bright as a star and further illuminates India, the birth-place of Yoga.