8 Magnificent Places to Celebrate Holi in India in 2019 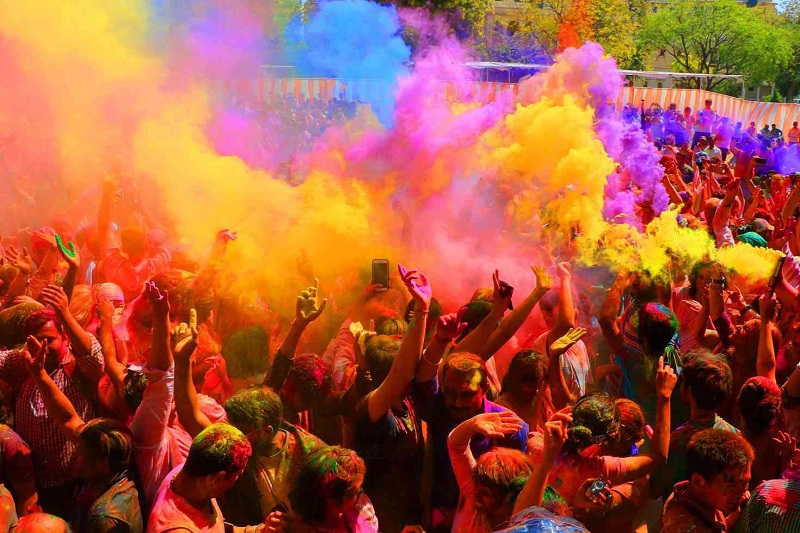 Holi is the festival of colors celebrated with great enthusiasm and grandeur across the country. This year in 2019, the festival will be celebrated on March 20 and March 21. The first day marks Holika Dehan and the second day is when people play with colors. Read on to know how Holi is celebrated in various parts of the India.

Banke Bihari Temple is a famous Krishna temple in Vrindavan where Holi is a great affair celebrated with fervor and gusto. It is a warm welcome of spring and a happy riddance to winters. Holi in Vrindavan, India, marks a grand gathering of people smeared in several colors tapping and dancing on the rocking tunes.

The city plays Phoolon Ki Holi on Ekadashi, the day before holi – a celebration that marks priests throwing flowers at the devotees of the temple. It doesn’t end here, there is another unique celebration called the Widow’s Holi in Vrindavan which allows the widows to wear colorful clothes and play with colors breaking the age-old convention. If you have got to know about this quite late, you can even book last minute flights to Delhi or Jaipur and reach Mathura to be a part of the amazing Holi celebration.

Ever heard about a tradition as bizarre as a celebration involving the act of women beating men with sticks? Weird, isn’t it? This is how people play Holi in the Barsana village of Uttar Pradesh. Famous as ‘Lathmar Holi’, the women of the village take sheer honor and pleasure in putting their sticks to use. It is one of the most strange yet the most interesting way of celebrating Holi in Mathura, India. If you want to experience the fun and excitement, reach Mathura with your family and enjoy the festival like never before.

It is not only in Uttar Pradesh that Holi is given great importance but West Bengal also adds itself on the list of the most happening places to celebrate Holi in India. Shantiniketan, one of the oldest premier university in the state, is the place where the great poet and laureate, Sri Rabindranath Tagore brought in the grand Basant Utsav with an intention to relive the age old tradition. The students and tourists dress in colorful clothes and celebrate the auspicious festival with immense zeal and fervor.

Delhi turns into a little rowdy and enthusiastic place with the kids transforming into color hooligans and adults immersing into the intoxicating festival fever. There are several amazing places to celebrate Holi in Delhi this year – colors, the tradition of drinking Bhang, music and dance. Nothing can keep Delhites from making Holi an extravagant affair each year. Of all the superb holi parties, if you are lucky enough to save tickets to “Mad Moozik” festival (Holy Cow) this year, you are in for a fantastic time. All the economy class flights to Delhi during Holi are sold out? Don’t worry as you won’t regret paying for the business class flights for the happening Holi celebration in the capital.

Punjab celebrates Holi in the most unique way as compared to the whole country. The Sikhs shout out loud following an ancient tradition. In the morning, they gather to exhibit a show of martial arts and play with colors in the evenings. The food scene on the occasion is lit as during any other festival in the state – Puri, Halwa, Malpuas, Gujias will leave you smacking your lips for long.

It is not often heard that there’s a grand Holi celebration in South India but Hampi is one such place where the locals and tourists make this a memorable event each year. Hampi is one of the most visited and favorite tourist places of the Western travelers. You will be amazed by the charm of the festival here with colors, music and dance all around.

Another district of West Bengal finds place in our list of best places to celebrate festival of Holi in India in 2019 – Purulia, In Purulia, Basant Utsav is a 3 days affair that begins before the day of Holi. It is a folk festival where the locals indulge in folk music and dance and exhibit their exceptional folk art. They present various types of folk dances such as Chau, Natua and Darbari Jhumur. The popular Baul musicians add elegance and melody to the event by singing melodious songs.

How can we talk about Holi and not bring up the royal celebration of Udaipur in Rajasthan. The beauty f the city of Lakes is indescribable and so is its Holi celebration. Till date the tradition is followed and the Maharaja of Mewar welcomes foreign tourists, guests, and several dignitaries to the Royal City Palace. The Maharana, wearing royal traditional clothes arrive s at the palace and a large bonfire is lit in the center of the vast palace ground. The bonfire is believed to be significant of the triumph of good over evil. Folk dances and music performances are performed over a lavish dinner, cocktails and spectacular fireworks.