Bhangarh Fort – The Truth behind Its Horrific Stories 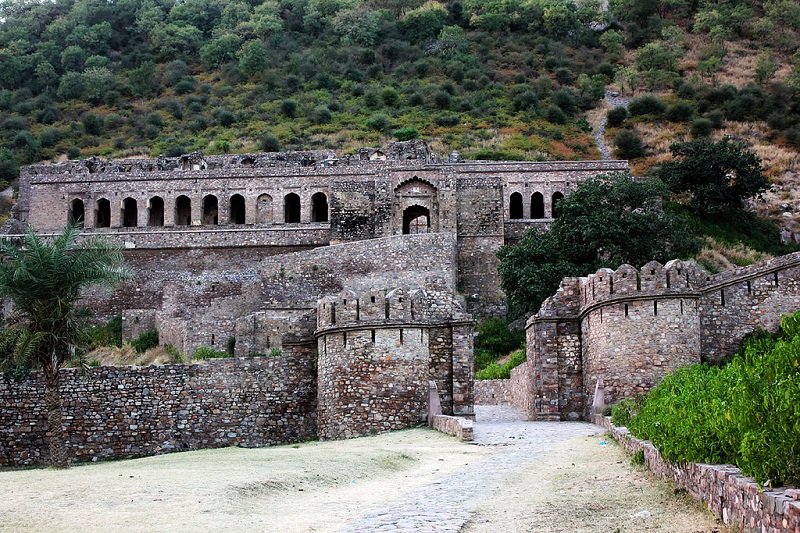 Do you remember any of the haunted stories by your Grandma from your childhood? We bet you remember all of them, let alone a few. In India, children grow up listening to horror stories of a haunted complex, a possessed man or even a haunted fort. Some of these stories are completely fictional while some date back to some real incidents of the past. Don’t believe it? Okay, just imagine you encounter a ghost from the stories for real! Sounds cliché, right?

Well, if you have heard any stories of Bhangarh Fort in Rajasthan, don’t think it is totally fictional as it is called the most haunted place in India for some reason. Located in the Alwar district of the state of Rajasthan, close to the Sariska Tiger Reserve, Bhangarh Fort is not a place to be visited by a weak-hearted person. So, only if you are a brave human with all the courage to face danger, you will definitely love experiencing this thrilling adventure of exploring the haunted Bhangarh.

When you enter the area of the fort, you will come across a hoarding by Archaeological Survey of India reading:

“No vehicles are permitted to enter the fort beyond this point. Failure to comply with this instruction can have serious legal consequences.”

Once you park the vehicle outside, you will find another hoarding while walking inside the neighborhood which reads:

“It is forbidden to enter borders of the haunted Bhangarh Fort before sunrise and after sunset.”

Already getting goosebumps? Many thoughts must be crossing your mind right now reading these hoarding warnings – What? Why? When? How? You have only one way to find all these answers – visit the Bhangarh Fort. We don’t want to scare you but the fact is due to lack of proper electricity, the ruins of the fort look bloodcurdling scaring the shit out of the bravest souls. There have been innumerable deaths in Bhangarh, not each one of which is reported in legal records.

Constructed by the younger brother of Akbar’s general Man Singh, King Madho Singh, the fort sought approval for the same from the ascetic Guru Balu Nath, the man who meditated in the place before its construction. AS per the stories recited by the locals, the ascetic approved the construction of the fort after he made the Kind swear that the shadows of the fort will never touch his meditation area. Unfortunately, the king couldn’t keep his promise and the moment the fort shadows reached Nath’s meditation area, he cursed the entire village to go roofless forever. After this incident, a roof is built only to collapse soon.

The incidents of Bhangarh doesn’t end with one, there’s another horrifying story of Tantrik Singhia. The tantrik fell in love with the Princess Ratnavati. He made efforts to win over her trough magic but when Ratnavati got to know about these plans, she ordered the servants to kill Singhia. Before dying, the tantrik too cursed the fort residents to die and that the village people will remain roofless all their life.

Bhangarh Fort at Nights – The terror of the ghosts

You must be wondering what happens there at night that it is forbidden to even roam around in the area after sunset. These warnings are not results of mere rumors but incidents that will give you a chilling thrill through your spine. The Archaeological Survey of India (ASI) has warned the tourist to enter the fort area before sunrise and after sunset and the one who does will be subjected to legal actions.

The locals have claimed screaming sounds of the ghosts in Bhangarh Fort, crying voices of women, clinging of bangles in the fort rooms and strange smell after dusk. Not just this, the spooky lights, ghostly shadows and weird sounds of dance and music are also reported in the area late night. Any of the brave hearts who showed the courage to stay back post sunset have not been seen alive the other morning.

Ideal time to visit: September to February. Like any other area of Rahjasthan, Bhangarh also remain hot in summers.

Visiting the place before or after the scheduled timing is forbidden by ASI.

No giggling. Some of the haunted places in India do charge you for entry, but not Bhangarh.

Haunted or not? There have been reported suicides and unnatural deaths in the area of Bhangarh fort. Go find out the truth yourself! The mystery of this fort is still to be unveiled.