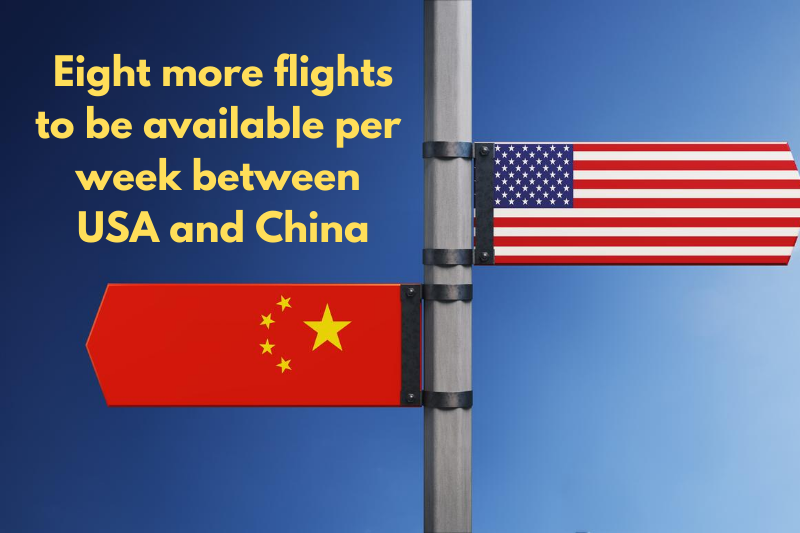 The US and China have decided to increase the current number of weekly flights operated by each country’s carriers from four to eight, said the order issued by the US Transportation Department (DOT) on Tuesday. Under this deal, the United States has granted permission for four Chinese carriers – Air China, China Eastern Airlines, China Southern Airlines, and Xiamen Airlines – to increase their current flight frequency from once weekly to twice weekly, whereas the Civil Aviation Authority of China (CAAC) has allowed the US to double their weekly flights to China. At present, each of the two US carriers, United Airlines and Delta Airlines, is operating two flights per week to China. With this agreement, the international flights available between these two biggest economies of the world will increase from 8 to 16 per week.

“United has served mainland China for more than three decades and we look forward to continuing to connect customers traveling between the US and Shanghai with two additional flights beginning in September,” said Patrick Quayle (Vice President of International Network and Alliances, United Airlines).

Delta Airlines, which presently operates two weekly flights to Shanghai (via Seoul), is all set to fly four times a week, starting August 24. This Atlanta-based carrier will fly two flights from Detroit to Shanghai, and the other two flights will go to Shanghai from Seattle.

The US Transportation Department, while describing this decision of increasing flights as “a step in the right direction,” also revealed its hope that the Chinese Government will nod for the complete restoration of the rights of US airlines to serve China under their bilateral aviation agreement.

“The Order also indicates our willingness to further revisit our action should the Chinese aviation authorities adjust their policies to bring about the necessary improved situation for US carriers in which both they and the Chinese carriers could fully exercise their bilateral rights,” says the DOT statement.

In today’s digital world, seeing an unknown metropolis is not only a wonderful form to undergo another culture, but also an option to discover...
Culture

The sky is filled with colors, kids are running with pichkaris, old uncles are sitting and enjoying gujiyas, and people are smudging faces with...
Travel

Houston is America's fourth-largest city. This rapidly growing town is a melting pot of various cultures. It has a significant population of Indians, Vietnamese,...