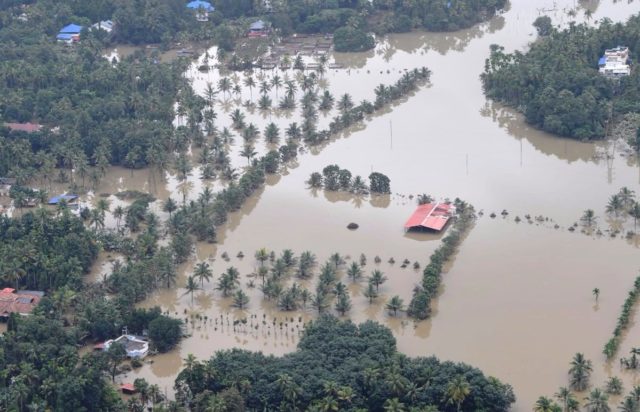 Floods in Kerala – The Devastation Caused and Aid by the Centre

The floods in Kerala are all that is circling in news and media from a month now. It is one of the disastrous floods in the state since almost a century. The situations all over the highlights homes inundated, people displaced and infrastructure devastated. During this wrecking scenario in the south Indian state, the entire nation came together in unison as help from all parts swayed in keeping humanity at higher terms. However, last 20 days have been the hardest time for the people of Kerala fighting against the calamity.

Here are all the answers you might be seeking to know about the floods in Kerala.

What caused the massive havoc in Kerala?

Rain and a lot of rains! It was heavy rainfall that flooded the state under neck-deep water leading to several landslides, damaged roads and hundreds of homes drowned and people dying in the waters.

The reason for the floods in Kerala as per the India Meteorological Department is the extreme monsoons experienced this year. Based on their report, the state received accruing rainfall of more than 2300mm which shows an increase by 37.49% in the rainfall this monsoon. Hilly terrains like Idduki and Wayanad received extreme rainfall of almost 3200mm that results an increase by 83.59%. This dramatic increase in the rainfall this year is evident how extraordinary monsoon turned out to be for Kerala.

Kerala experienced heavy torrential rains from August 8th  which lasted for more than 10 days. Districts like Palakkad, Ernakulum, Kottayam, Kollam, Thiruvananthapuram and Malappuram were reported to have over 40% excess rainfall from the normal course every year.

The government of Kerala recently blamed Tamil Nadu for the extreme conditions. Kerala contended Tamil Nadu government for opening gates of the Mullaperiyar dam – one of the reasons for floods in Kerala. However, TN CM K Palaniswami said in defense that the state was submerged in waters due to the excessive discharge of water from 80 reservoirs in total that were overflowing by heavy rains.

Facts say that the excessive rainfall in the state led in opening the gates of over dozens of dams which thereafter flooded “God’s Own Country”.

How the floods affected people and property?

Natural calamities like floods spare none. It doesn’t realize the difference between people and property and this is what chanced during the floods in Kerala. By now, the death count has reached over 400 lives with over 50,000 homes engulfed and damaged by the waters. The loss was not just to lives and infrastructure but also to livelihood. Around 40,000 hectares of paddy cultivation has been ravaged.

To our surprise, the financial loss due to the unexpected natural disaster has reached up to 20,000 Cr. Talking about the infrastructure and property damage in detail, almost a length of 10,000 kilometers of roads has been ruined all across the state. Around 250 bridges need repair and reconstruction. The beauty of the state is completely submerged in the dirt of sand and water.

There are farmers who have leased properties for cultivation and now all they had is perished. They have nothing saved and starting from scratch is the only option left with them. Similarly, there are daily wages workers who have lost their house and rebuilding without help from the government is next to impossible on their part.

Some of the major flood affected areas in Kerala are Ernakulum, Kottayam, Kozhikoe and Thrissur in Kerala. The most affected area is Ernakulum in Kochi into which excess water was drained on opening the gates of Idamalayar dam along the Periyar River. The Dam safety expert said that the flood is a result of poor planning of the disaster management authority. The damage could have been controlled if all the four gates of the dam were not opened at once, submerging the surrounding areas much faster than expected.

Whatever may be the reason, the disaster devastated almost everything from cultivation to household belongings of people, leaving some with nothing.

What aid did the Central Government offer?

Both Central Government and State Government have been actively involved in the flood relief and rescue services from the last 15 days or more. Kerala floods have shaken the lives in the state and help is seen swaying in from the central government’s end. The Centre has released Rs. 600 Cr. as advance assistance ensuring additional funds will be provided after the inter-ministerial team assesses the damage on their visit to Kerala.

Of the 600 Cr. offered by the Centre, 500 Cr. were on behalf of the Prime Minister Narendra Modi and the remaining 100 Cr. as promised by the Home Minister Rajnath Singh. The home ministry confirmed that the Centre has been providing continuous help during the hard time of floods in Kerala in terms of supplying food, medicines, medicines, settling up relief camps, deploying rescue teams and other rescue equipment for the cause and all of it was done without any reservation.

The Prime minister regularly monitored the situation of floods in Kerala from the day of his visit to the state on 17th August, 2018. On his instructions, massive rescue and relief operations have been started to save life and property. Almost 40 helicopters, 31 aircrafts, 18 medical teams of defense forces, 58 NDRF teams, 182 rescue teams, 7 companies of CAPF (Central Armed Police Forces) with 500 boats have been deployed at the flood affected areas in Kerala by the Central Government.

By now, around 60,000 lives have been saved and as reported by the Chief Minister of Kerala, electricity and water supply has also been restored in several affected areas and the process to retain it completely is still ongoing. IN addition to the Rs. 600 Cr. released by the Centre, Rs. 562.45 Cr. has been made available to the State Disaster Relief Fund of the state.

What are the other sources of aid to the state?

Not just this, effective foreign aid has also been reported recently. The UAE government offered a donation of Rs. 700 CR. to Kerala Relief Funds, but it is yet to confirmed and accepted by the Centre pertaining to the policy of “meeting the requirements for relief and rehabilitation through domestic efforts”.