10 Spellbinding Places to Visit in Jodhpur 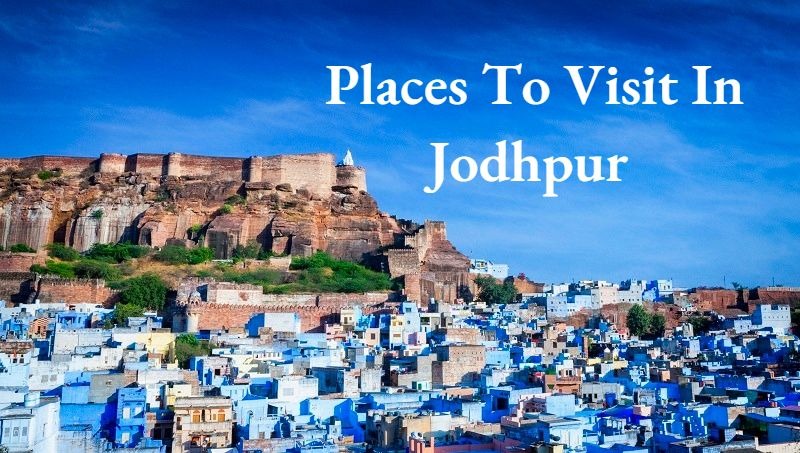 Jodhpur, also called as the Blue City, is the second largest city of Rajasthan known for its awe-striking architecture – the marvelous palaces, high forts, huge havelis and houses all painted blue. The towering forts of Jodhpur mark its magnificence a traveler would never want to miss. From the fortress of Mehrangarh to the milky white memorial Jaswant Thada, there are plenty of spellbinding places to visit in Jodhpur.

Also famous for the typical breed of horses Malani, Jodhpur is a city that wanderlusts must visit to experience the royal side of India. In this blog, I have discussed some of the best places to visit in Jodhpur. Keep reading to plan an ideal trip to the Blue City and book your last minute flights at affordable rates.

Rising high, invincible and perpendicular from a hill, is the Mehrangarh Fort, settled 125 meters high from Jodhpur’s skyline. The famous Mehrangarh Fort in Jodhpur, Rajasthan, is a historic monument packed with stories of legends and history. Once there, the gigantic gates, huge walls and imprints of cannonball will make you feel transported back in times of kingdoms and wars. The fort is still known for its exquisitely framed windows, sharply designed walls and carved panels.

An attractive monument turned hotel, Khejarla Fort is a 400 years old fort situated 85 kilometers from the main city of Jodhpur in a rural setting. It is a solid example of Rajput architecture as visitors go mesmerized by the lattices of friezes, intricate jharokas and the picturesque settings. Make sure you click hundreds of pictures in and around the beautiful fort.

One of the top five places to visit in Jodhpur is the world famous, Umaid Bhawan Palace. The magnificent palace was constructed by Maharaja Umaid Singh in the year 1929 as retaliation to a famine hit the state during that period of time. While construction of the huge palace, it was referred as Chittar Palace for the stones from Chittar hill used in building it. The brilliant mind behind designing the layout of the palace is that of HV Lanchester, a then popular British architect. The palace was built in a time span of 16 years using marble and sandstone with a perfect blend of Western Art Deco, Classical Revival and Indo-Saracenic styles.

Going with the literal meaning of Moti Mahal, it is a Pearl Hall, once serving as a place for the royal families to hold the audience. The Mahal had five nooks and glass windows making it easier for the queens to hear the proceedings held in the Srinagar Chowki, recognized as the royal throne of Jodhpur. The city represents an exceptional kind of grandeur for which people even book business class flights to Jaipur from different parts of the world.

Located within the boundary of Mehrangarh Fort, Sheesh Mahal is a glass palace, known to be one of the best masterpieces of architecture in the city. The palace is adorned with mirror walls stretching from the ceilings to floors. Moreover, adding to its brilliance, it is overlapped with mirror work of religious figures painted brightly.

As the name suggests, Phool Mahal or Flower Hall, is the most extravagant hall within the compound of Mehrangarh fort. It has amazing chambers believed to be the pleasure domes of the Maharajas. The gold for building the enormous work of art was brought from Ahmedabad, Gujarat.

Located in the Mehrangarh near Fateh Pole, these are two lakes built in 1459. Ranisar Lake was constructed for King Rao Jodha’s wife, Queen Jasmade Hadi while the Padmasar Lake was built on orders of Rani Padmini, the daughter of Mewar King Rana Sanga.

Chamunda Mataji was the favorite goddess of Rao Jodha and for fulfilling his urge to worship the deity; the Chamunda Mataji Temple was built with an idol placed inside. Following the Maharaja’s footsteps, the locals still worship Chamunda Mata and the Goddess is considered as the Isht Devi of the royal family.

It is a milky white memorial constructed in the late 19th century in memory of Leader Jaswant Singh. It is one of the places to visit in Jodhpur in two days’ time. If you are in the city for a couple of days, ensure you visit this grand tourist attraction. Spreading some more knowledge about Jaswant Singh, he was the ruler of Jodhpur who made great attempts to reduce the incidents of crime, catch dacoits, construct railways and worked widely to increase the economy of Marwar.

Today Jaswant Thada is maintained by Mehrangarh Museum Trust (MMT) and is declared a tourist attraction open to public from across the world. Not only this, MMT has opened a Museum in Jaswant Thada exhibiting the popular portraits of the rulers of Marwar giving informative didactics. One can understand the history of Marwar kingdom through these describable portraits. The grounds are an ideal venue for music festivals like World Sacred Spirit Festival and Rajasthan International Folk Festival.

More often referred as clock tower of Rajasthan, Ghanta Ghar is located in the busiest area in the city of Jodhpur – Sadar Bazaar. Built by Shri Sardar Singh Ji, Sadar Market is a popular shopping place in Jodhpur among the tourists and so is Ghanta Ghar. You can purchase clay figurines, classic silver jewelry, Rajasthani textiles, miniature elephants and camels and marble inlay work. Can’t wait to explore the glory of Jodhpur? You can book discount flights to India for a reasonable package from any part of the world.