Prayagraj Kumbh Mela 2019 – All about the Religious Gathering 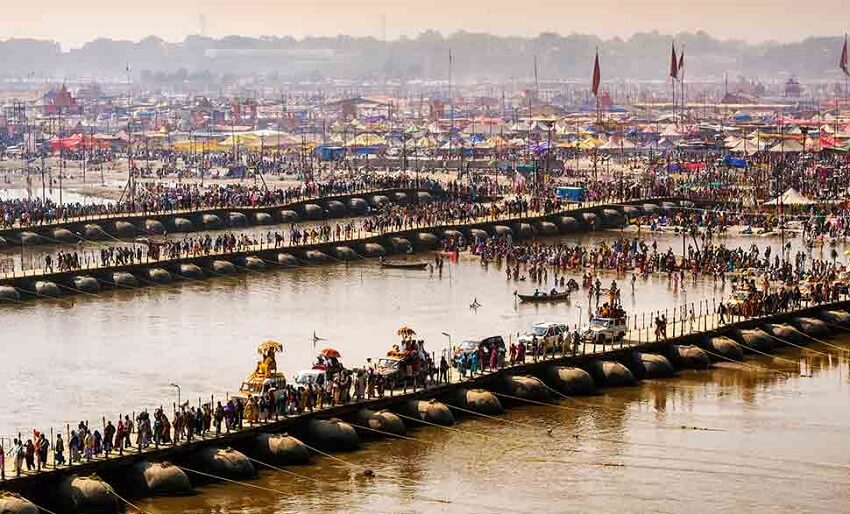 The Argh Kumbha Mela is the largest religious gathering in the world held four times over a course of twelve years. According to Hindu mythology, it is believed that Lord Vishnu dropped 4 ‘Amrita’ pots that is considered as the drink of immortality at four different places which ever since has been the venues for the Kumbha Mela. Kumbha Mela was recognized as the Intangible Cultural Heritage of Humanity by the UNESCO in the December, 2017.

A brief about Kumbha Mela 2019

In 2019, the Kumbha Mela is to be held in Prayagraj, earlier named Allahabad in Uttar Pradesh from 15th January to 4th March. This year has brought a lot of changes in the in the religious ritual held with great joy and grandeur. The fair will cover an area of almost 45 kilometers, almost double of the 20 kilometers radius last time. Unlike previous years of Kumbha Mela, the pilgrims will be allowed to visit the ‘Akshay Vat’, a sacred Banyan tree in Hindu religion and Saraswati Koop, the assumed source of River Saraswati according to mythological beliefs.

The 55-day long religious gathering in Prayagraj to be held over a vast spread of 45 kilometers will bring together the heads of missions of different countries on the invitation by Ministry of External Affairs. On December 15, 2018, over 50 Heads of Missions (HOMs) visited the site of Kumbha Mela under a guided tour and observed the massive arrangements taking place for the world’s largest religious fair in Prayagraj.

The four fixed venues of Kumbha is based on Hindu Mythology which states about the dropping of earthern pots filled with ‘Amrita’ (Drink of Immortality) by Lord Vishnu. Another story depicting mythological significance is about the Akshay Vats. It is believed that there are only four places all over the country where the sacred Banyan tree is found and it is here in these places that the Kumbha Mela is held over a span of 12 years. In Prayagraj (Allahabad), Akshay Vat present inside the Allahabad Fort, a monument now under Indian Army control, has the power to fulfill all the wishes of devotees coming from far off lands. If you haven’t booked your tickets yet, get last minute flights to the nearest airport from Prayagraj.

All about arrangements made for Kumbha Mela 2019

In 2019, several things have been improvised keeping the comfort and security of the devotees in mind. A new road has been constructed to the tree to facilitate the journey of the pilgrims traveling from across the country.

Are you planning to visit the religious Kumbha Mela in Prayagrag with your family? If so, here is everything you should know about the Prayagraj Kumbha Mela 2019 – from food to accommodation to security. It is believed that no matter a devotee travels by road or gets business class flights booked to reach the religious festival, the faith and spirituality of each is beyond their status.

We hope you can now travel to Prayagraj without any worries as the government has got you covered completely.