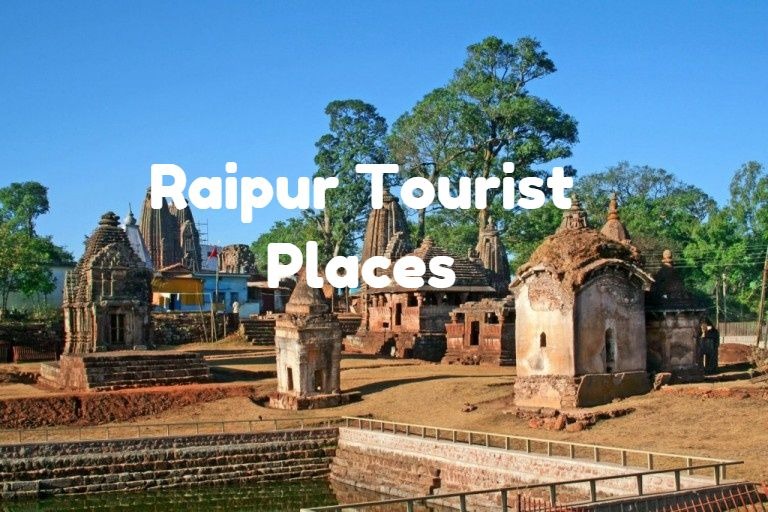 Although it’s among the offbeat Indian destinations, there are several amazing places to visit in Raipur. Not just the capital city but Raipur is also one of the top tourist places in Chhattisgarh state. What is Raipur famous for? Raipur is famous for its impressive steel markets. But you will also find other attractions in and around the city. For instance, there is a waterfall near Raipur as well as a hill station near Raipur. So be assured that not only are there amazing places to visit in Raipur, there are plenty of attractions to explore nearby the city as well.

Check our list of the topmost Raipur attractions you can explore on your trip to this fabulous city!

Raipur is a must-visit place in Central India. Board last minute flights if you haven’t got the time to make flight bookings in advance. Scroll through our list of the top places to visit in Raipur on your vacation.

For travelers seeking tranquility, this is one of the most peaceful places to visit in Raipur. This also happens to be one of the best family vacation spots in India. You can sit by the banks of the lake and take in beautiful sights while your kids play around. Away from all the city noise and chaos, this is an ideal picnic spot. You can visit with your beau, family, or friends alike.

Built in the late 1800’s by King Mahant Ghasidas, it was meant to preserve the archaeological heritage of Raipur so future generations could see it. Among the oldest museums in India, it houses several invaluable historical artifacts which include ancient coins, kalachuri sculptures, Buddhist bronze structures, and various clothing and ornaments that were worn by the tribal people of Chhattisgarh.

Dedicated to Mahamaya, an avatar of Hindu goddess Durga, the Mahamaya temple welcomes ardent devotees from across the country regularly. Durga Puja is celebrated on a massive scale with the temple being done up brilliantly with lights and other decorative ornaments. Brilliantly lit during this time, the temple is among the best places to visit in Raipur at night.

Built sometime in the 17th century, the monastery-and-temple lies on the banks of the stunning Maharaj Bandh River which is an awesome tourist attraction in itself. Dedicated to Hindu deity Lord Rama, it is said that the Doodhadhari Monastery and Temple was named after a monk who consumed only milk and nothing else as his source of food.

This is among the most picturesque places to visit in Raipur when arriving on business class flights. About 46 m tall, the gorgeous waterfall is rimmed by dense forests, breathtaking mountains, and endless lush greenery. It’s a paradise for nature-loving tourists looking to take a hike. It is advisable to carry some food in addition to a change of clothes as there may not be many dining options in the area.

Also popularly referred to as Buddha Talab, Vivekanand Sarovar is among the most stunning lakes to visit in Raipur. The lake’s name is derived from the legendary Swami Vivekananda. It is a popular belief that he stayed in the vicinity of this lake during his visits to Raipur. Locals also believe that the Buddha had a favorite spot somewhere around here where he’d sit and meditate for hours on end.

Located on the banks of the scenic Kharun River, this isn’t just an ordinary garden. Nandanvan Garden is also home to a mini zoo where you can spot exotic wildlife such as lions, deer, tigers, and panthers among other animals. This is one of the best places to visit in Raipur for wildlife and nature lovers. You can easily spend an entire day here without even realizing it.

Generally speaking, the ideal time to visit Raipur is from October to March. The weather in Raipur city is most pleasant this time around and you can explore the top tourist attractions in peace. Since summer can be a bit too hot, you should avoid visiting this time if you aren’t used to that kind of heat. Explore the best places to visit in Raipur anytime between October and March.

How to Reach Raipur:

Swami Vivekananda Airport is the domestic airport in Raipur approximately a half an hour’s drive from the city. It is well connected to major cities in India such as New Delhi, Bengaluru, Bhopal, Chennai, Ahmedabad, Hyderabad, Jaipur, Chandigarh, Mumbai, Indore, and Kolkata. You can book India cheap tickets to any of these major cities having international airports and head over to Raipur from there. Raipur Railway Station helps connect the city with major parts of the country via trains. There are several bus routes that go to Raipur as well. So pick whichever way you’d like to reach and explore the best places to visit in Raipur.

Previous article
8 Best Places to Stay in India during Your Trip!
Next article
List of Top 10 Best Airports in the World in 2018