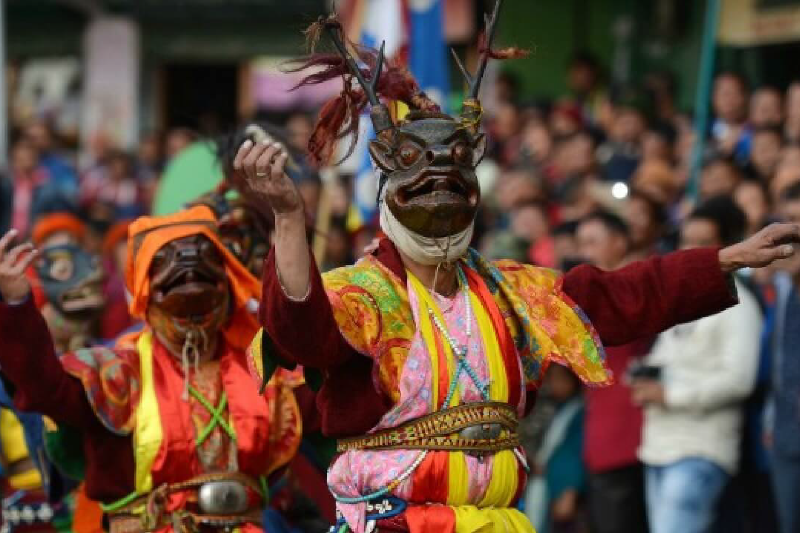 One of the unique cultural events in India is the bright and colorful Tawang Festival. Organized by Arunachal Pradesh Tourism Department to showcase the region’s culture and heritage, it offers a lens to see this remote state in India.

Tawang Festival 2022 is all set for 28th to 31st October. If you are still thinking of a place to visit next month; think Tawang in Arunachal Pradesh. This festival is a great opportunity to visit Arunachal Pradesh and experience a distinct cultural identity of the state.

About the Tawang Festival

The festival is held in Tawang town and is a three-day event. The inaugural edition of the festival was in 2012.

At the start of the festival, monks of Tawang Monastery start a procession and reach the festival venue. This is known as ‘Sebang’. The local tribes hold a number of events for the festival. Expect dances and musical performances, which will invite you deeper into the soul of the region.

The Monpa Tribe performs the Dance of Yak, which is a folk performance and retells an epic story. In the Yak Dance, one dancer becomes the yak and another dancer is atop its back. You may also see their enactment of the Tibetan version of the Ramayana in the form of Aji Lhamu Dance. It is performed by five main characters (though it is mainly performed during the Losar Festival in the state).

Exhibitions of local handicrafts is another attraction of the festival. Buddhist events, monastic dances, craft workshops, and several other activities are part of the festival. You can also sample a great number of local delicacies at this time and mingle with the locals.

It is now even easier to reach Arunachal Pradesh. Its remoteness was one main reason why people from other parts of the country skipped it or avoided visiting it. But now the state has a fully operational Greenfield Airport – the Hollongi Airport (official name Donyi Polo Airport) near the state’s capital Itanagar. You can take flights to Kolkata and then fly to Arunachal Pradesh. Trains to Itanagar are also available from various cities such as Guwahati and Kolkata.

Tawang Festival 2022 in Arunachal Pradesh is an opportunity to not only visit the mystical Arunachal Pradesh. But it is also the perfect time to familiarize yourself with a distinct cultural identity of India.

Tawang itself is a mesmerizing hilly town with clouds mingling with the green hills; houses atop rocky structures forming colorful staircases, and air so fresh it can revitalize your very being. October is also the perfect time to visit Arunachal Pradesh. The cool weather is just starting to set in the region and the nip in the air can be refreshing. It is the perfect time to plan your visit to the Tawang Festival 2022 in Arunachal Pradesh.

Mussoorie, crowned as the Queen of the Hills, is popularly known for its mesmerizing mountainscape, verdant valleys, lush green forests, sparkling lakes, and beautiful...
Culture

While food is a major part of every celebration - be it a big or small event, a major festival or a fair -...
Events

Rajasthan’s Techno Music Festival, Locals District is Back for its 4th Edition at Alwar

Locals District Festival – the ‘none-of-its-kind’ open-air techno music festival in India – is returning for its fourth edition (after a hiatus of two...