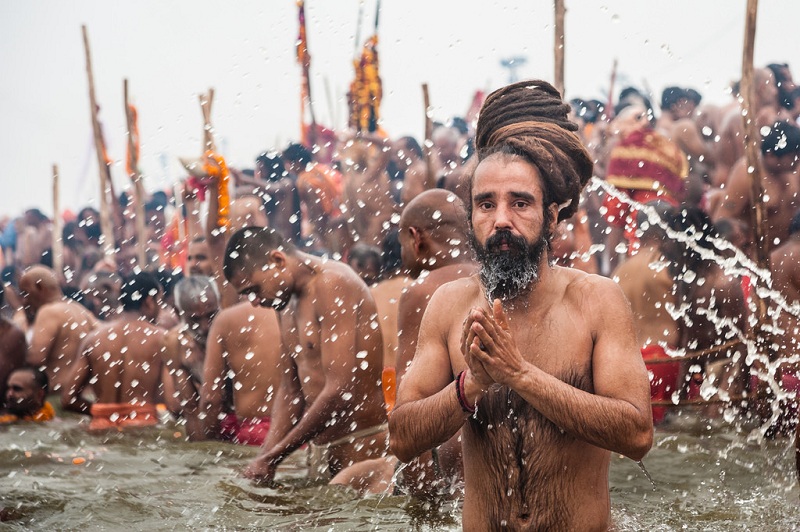 The world’s largest congregation of pilgrims in the world, the Kumbha Mela of 2019 has got three Guinness World Records in its hold. Isn’t it something making every Indian proud? Kumbha Mela is among the largest fairs in the world and is no less than a festival in India. 2019 is marked with the exceptional records making the country proud. The team of Guinness World Records was here in India from February 28 to March 3, 2019, the period when all the three records were performed.

The first Guinness World Record confirmed by the Prayagraj Mela Authority (PMA) is “the maximum contribution to an event of handprint painting in just 8 hours”. The activity being a part of ‘Paint my City’ involved participation of over 7,664 people which broke the previous world record held by South Korea. From children to adults, saints to security staff, people from different part of the world came together to participate in the activity. It was a 60 feet canvas that displayed hand impressions of every size.

The second record set at Kumbha Mela 2019 is for the “largest bus parade”. There were around 500 buses painted with the theme of Kumbha Mela on them driven through the period of the world fair. All the mela festivities were carried out smoothly, including the performances and royal baths. Another astonishing fact is that over 22 crore pilgrims bathed in the Holy Ganges. An unbelievable record in itself!

The third world record set in the Guiness Book of World Records is for “largest sanitation drive”. Initiated by Prime Minister Shri Narendra Modi under Swacch Bharat Abhiyaan campaign in the year 2014, this was the largest sanitation work and crowd management drive ever observed in the country. Over 10,000 workers were involved in taking the cleaning and sanitation responsibility during the event.