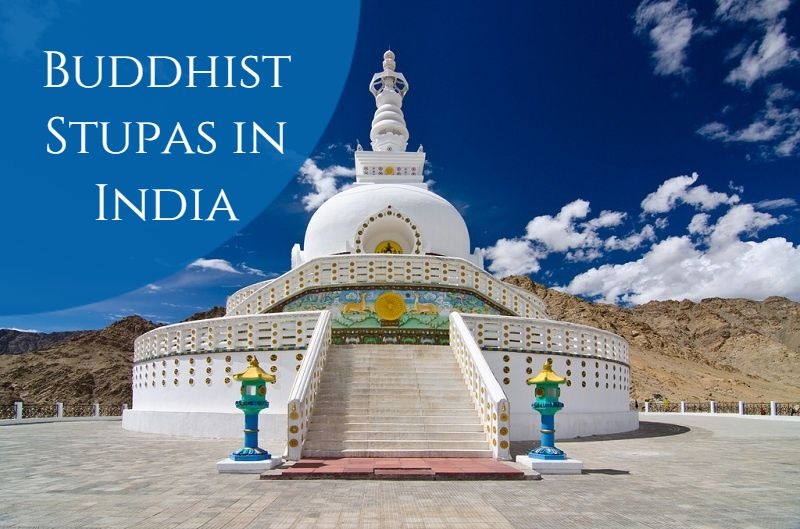 At times all you need is a little peace of mind spending some quality time in spiritual and calm surrounding. Want to rejuvenate your mind and soul in tranquility, all top yourself? Fortunately, there are some of the most believed Buddhist stupas in India that will imbibe positive karmic imprints in your mind.

Here are the top 5 Buddhist stupas in India you must visit. Your path to peace!

Shanti Stupa in Dhauligiri, Odisha is one of the seven shanti stupas built in India by the Japanese Buddhists. The Peace Pagoda in Dhauli Hill was jointly built by the Kalinga Nippon Buddha Sangh and Japan Buddha Sangh in 1972. Situated exactly at the center of the believed Kalinga War site, lay the bloodshed stories of Kalinga encircling the stupa. You will get allured by the gallery of chaityas, rock sculptures of an elephant procession, Bodhi tree, etc., pillars and stupas.

Retaining the relics of Buddha, this great stupa is built on top of a hill in Sanchi in Madhya Pradesh. Sanchi Stupa presents and preserves the ancient art and history of the Mauryan period. With an intention to protect and expand Buddhist philosophy, Emperor Ashoka ordered the construction of Sanchi Stupa in the 3rd century BC. The bisectional structure along with the ‘chatra’ is a significance of honor and houses Buddha’s relics. There are Sankha Lipi inscription dating back to the Gupta period and Ashokan inscription on the sandstone pillar of the stupa. This Buddhist stupa is amongst the most popular stupas in India and travelers from across the world visit the place to understand the hidden layers of Buddhist philosophy. Better book your business class tickets already!

Located 13 kilometers from Varanasi in Sarnath, Dhamek Stupa is one of the earliest Buddhist stupas in India built by King Ashoka in 249 BC. It is a 43.6 meters stupa standing like a solid cylinder of stones and bricks with a diameter of 28 meters. The stupa is carved with figures of flowers, birds and humans with inscriptions in Brahmi (script).

It is believed that Lord Buddha delivered first sermon post enlightenment to five disciples on the Eightfold Path to nirvana.

Another Shanti Stupa (Peace Pagoda) of the seven shanti stupas in India is located Leh, Jammu Kashmir. Settled on the Chanspa hill, the shanti stupa was built by ladakh Buddhists, and Japanese Buddhist Gyomyo Nakamura and Bhiksu in 1991. You can find the relics of Buddha at the base. Tourists from all round the world come all the way to Leh for the appealing view and religious significance, turning it into a popular tourist attraction.  What are you waiting for? If you haven’t booked your tickets by now, get the last minute flights to India at an affordable price from Indian Eagle.

Of its two level structure, the first level signifies the Dharmacakra with two deer on the sides and a golden image of Buddha on the platform representing the “turning wheel of Dharma”. Coming to the second circle, the reliefs describe birth of Buddha, Buddha “fighting and overpowering the devils”, during meditation and death of Buddha. The peace pagoda resembles to be a symbol of a link between Japan and Ladakh.

The Maha Stupa is one of the most amazing archaeological Buddhist stupas in India dating back to around 2000 years. Only 15 kilometres from Vishakapatnam, Thotlakonda experienced activities that owed to faster Roman trade during Kalinga reign. You can still find the excavated sites closely settled like Pavurallakonda, Bavikonda and Hinayana Buddhist Complex. Several other excavated properties surrounding the ancient structure include the swamedha altar, monasteries, university, viharas, royal baths, modern drainage system and chaityas.

Hopefully, you can now have the best place when in search of peace and spirituality at the same time. Ensure you visit all 5 of these Buddhist stupas in India at least once in your lifetime.

Previous article
7 Emerging Travel Destinations in India to Look Out for in 2018!
Next article
7 Beautiful Villages in India You Shouldn’t Miss