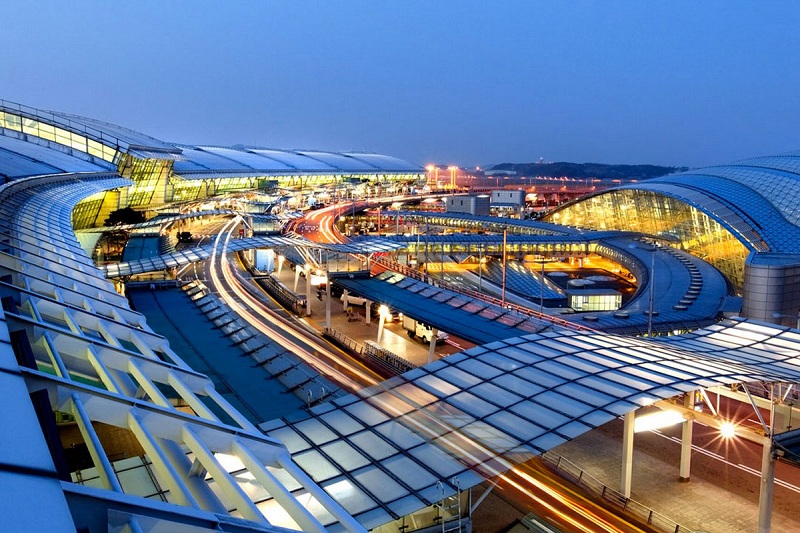 No. of passengers annually – 62.2 million

What makes it the best – Now for the sixth time in a row, Singapore Changi International Airport stands as the No.1 airport in the list of the best airports in the world. It is the main hub for Silkair, Tigerair and Singapore Airlines. It holds the 16th place among world’s busiest airports.

The Singaporean airport is praised for its first class operation, amazing architecture, luxurious amenities shopping and dining options. Passengers with a layover get the treat of going to the movie theatre; enjoy the multimedia entertainment deck, the wild corkscrew slide and spas. For its better cleanliness and fantastic customer service, people book flight ticket to Singapore airport instead of any other nearby airports, even while booking last minute flights.

No. of passengers annually – 57.8 million

What makes it the best – Incheon successfully holds the third place among the most elite airports in the world. Settled on an island close to the South Korean Capital, ICN is the main hub of the Korean Air. Started operating in the year 2001, it is today the 24th busiest airport in the world. Incheon International Airport is popular for its array of facilities such as shopping, dining options and bunch of cultural performances. It also houses a Korean culture museum for the visitors.

No. of passengers annually – 79.9 million

What makes it the best – Haneda is home to two international airports serving the area of Tokyo. Situated only a few miles away from the city of Tokyo, Haneda justifies well in being a famous entry port for both tourists and business travelers. Not just its tag of being the 5th busiest airport in the world, Haneda is also known for its cleanliness, shopping and service efficacy.

No. of Passengers annually – 70.3 million

What makes it best – Ranked among the top 10 biggest airports in the world, Hong Kong International Airport is constructed on an artificial island near the Hong Kong coast. Since its inauguration in 1998, it has been regarded as a popular facility in the world.

Being one among the world’s busiest airports, Hong Kong International airport (HKG) is the main base to Hong Kong Airlines, Cathay Pacific and Dragonair. Visitors love spending time at the golf course close to terminal 2. The ones traveling in business class flights spend quality time here during short layovers.

No. of passengers annually – 37.3 million

What makes it the best – DOH or the Hamad International Airport was established in the year 2014 and today serves as the main hub of Qatar Airways. There are two terminals stretched over an area of 5,400 acres costing $16 billion for construction. It is reputed as the most luxurious airport having World’s most significant terminal complex architecturally.

No. of passengers annually – 42.3 million

What makes it the best – Situated in the in downtown Munich, the Munich Airport is ranked 2nd among the busiest airports in Germany following Frankfurt on top of the list. MUC serves as the main base for Lufthansa, Air Berlin and Condor. The infrastructure highlight an airy and glass-architecture. There is a visitors’ park close to the airport featuring mini golf and showcases the historic aircraft.

No. of passengers annually – 9.8 million

What make it the best – Located on the artificial island amidst Ise Bay near Nagoya city, Central Japan International airport is the main hub for ANA and Japan Airlines. Also named Centair, it is declared as World’s best regional airport.

Having a 1,000 foot sky deck, it provides a space to passengers for watching ships sailing into the Nagoya Port. It also has a Japanese bathhouse to take a relaxing bath while watching the beautiful sunset in the bay.

No. of Passengers annually – 75.7 million

What makes it the best – Heathrow is ranked as the 7th busiest airport in the world and biggest airport of the five primary airports in London. It is up for an addition of new terminal building (Terminal 2) and is still under renovation. Skytrax declared its Terminal 5 building as the best airport terminal. The terminal building is eight years old now. It is the main base for Virgin Atlantic and British Airways.

No. of Passengers annually – 27.7 million

What makes it the best – Located only 8 miles from the city of Zurich, the ZRH is considered to as the base to Swiss International Airlines and an ideal hub connecting the largest city of Switzerland to the other parts of the country. Passengers having an extended layover can have the facility of intake-skate rentals, bicycle and quick excursions to Swiss Museum of Transport Lucerne by the Zurich Airport.

No. of Passengers annually – 60.8 million

What makes it the best –Among the busiest airports in the world, Frankfurt is the 4th in the continent of Europe. It is one of the most significant transit hubs across the globe. FRA is renowned to be the home base for Lufthansa and over 280 jets from its fleet. The airport is praised for its easy transit process between terminals and the dining and shopping options in opulence. However, there have been some complaints of long lines at immigration counters.