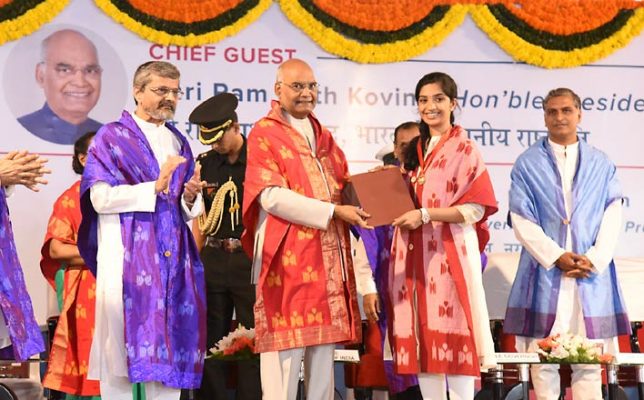 Hyderabad: Sneha Reddy, a brilliant student of IIT Hyderabad, who graduated from the reputed institute this year made headlines when she bagged an INR 1.2-crore per annum package with the tech giant Google. Setting new records, this is the highest package ever to be bagged by any student in the history of IIT-Hyderabad since it was first established in the year 2008. Until May, the highest package offered to a student was INR 40 lakh per annum with the average package being placed at around INR 11.5 lakh.

Chosen for the notable Google Intelligence Project, Sneha Reddy has earned the medal under the reputed ‘Excellence in Academics and Co-curricular Activities’ and received it from the honorable President Ram Nath Kovind. She has bagged a total of four gold medals.

Sneha Reddy successfully completed four rounds of tests conducted by the tech giant recently. After acing every round, she needed to travel to the United States for the final round. She couldn’t make the trip, unfortunately, due to some unforeseen circumstances. However, Google decided to hold the test for her online owing to her brilliant performance in the previous rounds. Also acing this, she bagged the whooping INR 1.2-crore per annum package.

Surprisingly, Ibrahim Dalal, the student topped Sneha’s batch, managed to bag a package of INR 35 lakh per annum. While also with Google, Dalal’s package is one that is considerably less than Sneha’s. Dalal also has earned the medal for scoring outstanding CGPA for this academic year.

While her native is Vikarabad, Sneha Reddy’s father Sudhakar works in Hyderabad in a software company. She graduated this year from IIT-Hyderabad in Computer Science. The faculty at IIT-Hyderabad was all praises for the brilliant student who made the institute incredibly proud. Sneha says that at IIT-Hyderabad, students are encouraged with thought-provoking experiments which ultimately helped her choose the much-coveted project with Google.

President Ram Nath Kovind presented the best-performing students with gold medals at the convocation ceremony held recently. Having created history by bagging such a huge package, Sneha Reddy is well on her way to global-level achievements. Here’s wishing the brilliant IIT-Hyderabad student a hearty congratulations and the very best of luck for her incredibly bright future!