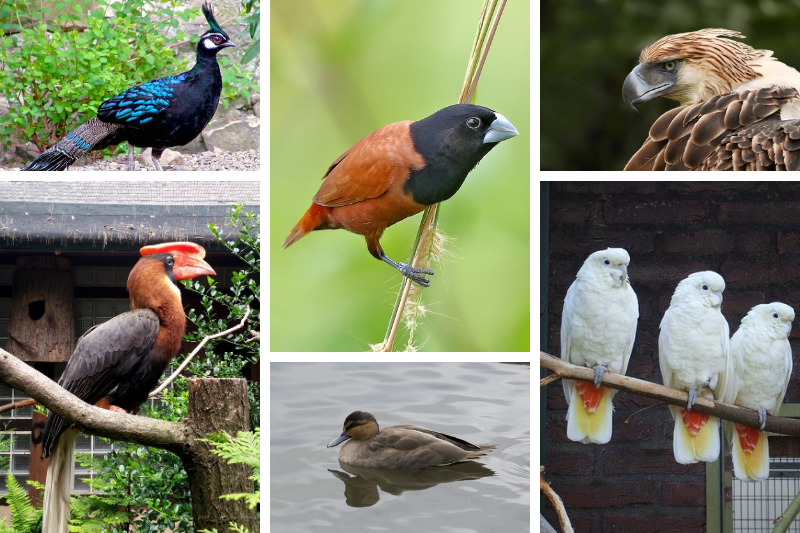 Every bird-watching enthusiast agrees there is something pleasantly gratifying about observing birds in their natural habitats. If you love to travel across boundaries for the joy of birding, you must consider the Philippines for your next birding adventure. The avifauna of the Philippines, which consists of more than 700 species of exotic birds, including 200 endemic species, promises a great birding experience. So, all the birders and bird photography enthusiasts have just got another reason to visit this beautiful archipelagic country! Go pack your binoculars, field guide, comfy footwear, brimmed hat, and other bird watching equipment because this is the time for a birding adventure in the Philippines!

Best months to see birds in the Philippines:

The Philippine eagle, declared the national bird of the Philippines in 1995, is the world’s largest eagle in terms of length (3 ft) and wingspan (approx. 7 ft). Sadly, it is one of the critically endangered raptors in the world with a population of less than 500. Endemic to the forests in the Philippines, this eagle can be found in the rainforests of Luzon, Samar, Leyte, and Mindanao.

Chestnut Munia or black-headed munia, locally called Mayang Pula, is the most common bird in the Philippines. This tiny passerine, the former National Bird of the country, frequents rice fields, grasslands, and marshes. Keep your camera handy, you may spot this beautiful little winged creature just as you go for a morning/ evening walk!

Known as Papan in the Philippines, this is a large dabbling duck endemic to the Philippines.  They are said to inhabit all types of wetlands present in all the major Philippine islands; however, you are more likely to find them in the Luzon and Mindanao islands. This endemic species has been a poor victim of over-hunting and wetland conversion that got listed under the vulnerable category on the IUCN Red List.

Popular as the Philippine Cockatoo, the red-vented cockatoo is one of the critically endangered birds in the Philippines. It generally lives in mangroves, lowland forests, and riverine areas. The last two strongholds of these extremely rare birds in the Philippines are Palawan and Rasa Island. So, venture into the rainforests and mangrove swamps of Palawan for a glimpse (and a snap too) of these exotic birds. The Katala, as it is locally called, is a highly active social species and is usually seen in flocks.

Rufous Hornbill or Philippine Hornbill, one of the 11 endemic hornbills, is the biggest of all Philippine hornbills! This critically endangered bird in the Philippines can be found in the evergreen forests spread across 11 islands, including Bohol, Leyte, Luzon, Samar, and Siargao. Locally known as Kalaw, it has three subspecies namely Luzon Rufous Hornbill, Visayan Rufous Hornbill, and Mindanao Rufous Hornbill. Its periodic noontime call gave this bird the nickname, “the clock of the mountains”.

The most vibrantly-colored bird in our list of birds in the Philippines is this Palawan Peacock-Pheasant, which dwells in the humid forests of Palawan. With a high-pointed crest, iridescent metallic blue or blue-green plumage, glossy black body, and spotted tail feathers, the male birds look more spectacular than the females which, by contrast, have a less-conspicuous silt plumage (Palawan peacock-pheasants are sexually dimorphic).

Previous article
Philippines Travel Guide: Everything you need to know
Next article
Traveling on budget: Top Four Budget-Friendly Tourist Hotspots in the Philippines