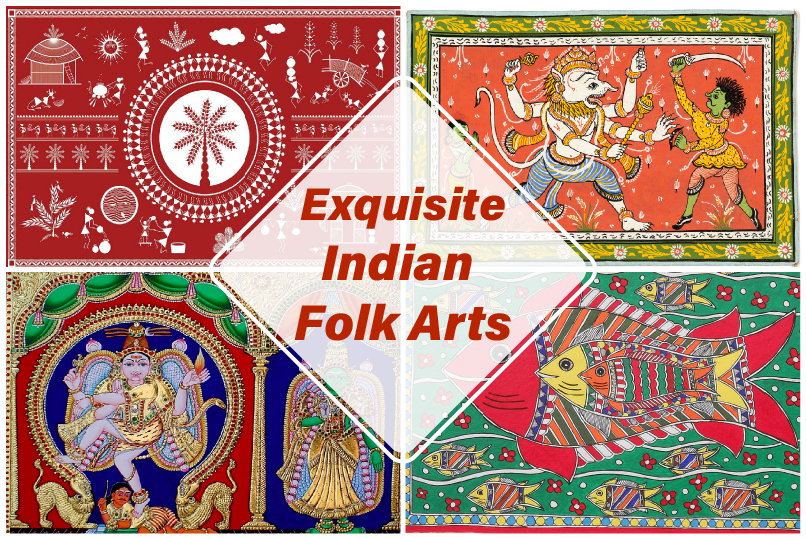 India is a country recognized for its traditional art forms, which speak volumes about the cultural diversity of the country. Folk motifs are common in the most artistic creations that originate in this land, thus piquing everyone’s interest in traditional Indian folk arts. For all culture enthusiasts like you, here’s an overview of the most popular Indian folk art paintings. The creation of these Indian folk arts is a painstaking process, yet most artists traditionally practice it, keeping it alive through generations.

Madhubani painting originated from the Mithila region of ancient India (present day Bihar and some areas in Nepal) during the time of Janaka Maharaja, father of Goddess Sita. Hence, it is also known as the Mithila painting. Eye-catching geometric patterns, brilliant use of bright natural colors, and religious motifs are characteristic of Madhubani paintings. Artists fill up the entire space creatively with beautiful drawings of flora, fauna, and various geometric designs. Bharni, Kachni, Tantrik, Godna, and Kohbar are Madhubani’s five distinctive styles. Most paintings depict celebrations associated with special occasions such as birth, festivals, and weddings; especially wedding scenes of Sita-Rama from Ramanyana and Rukmini-Sri Krishna from Mahabharata.

Native to a small town called Thanjavur in the South Indian state of Tamil Nadu, the origin of this traditional Indian folk art form can be traced back to the 16th century at a time when Thanjavur Nayakas and Vijayanagara Rayas encouraged the art and literature in their kingdom. Thanjavur paintings are renowned for their exquisite finishing – the panel paintings are embedded with precious and semiprecious stones and adorned with gold foil, giving them an overall glittery finish. Gods, goddesses, and ancient saints are the most common subjects of Thanjavur paintings.

One of the oldest Indian folk arts, Warli was created by the Warli and other tribal communities that primarily inhabit the Northern Sahyadri Ranges in Maharashtra. What sets Warli apart from other India folk art paintings is its simplicity. Beautiful stories are painted with just the use of basic shapes like straight lines, circles, triangles, and squares. A human form is created with something as simple as a circle, a triangle with another one inverted on it, and a few straight lines. These aesthetic Indian folk art drawings capture the rustic lifestyle and document regional rituals, religious practices, occupations, and celebrations. Warli paintings are traditionally done in white on a red ochre or brown background.

Kalamkari literally translates to pen-work; This traditional Indian folk art form belongs to Andhra Pradesh and is of two types – Machilipatnam Kalamkari (originated from Pedana town of Krishna district) and Srikalahasti Kalamkari (originated from Chittoor district). While the former is a block-printed form of artwork, the latter has a free-flowing style. Kalamkari art employs diverse themes derived from mythology as well as day-to-day life. It is usually done on fabrics with bamboo pens made by artists themselves. Kalamkari sarees are very popular throughout the country.

Pattachitra is a combination of the two Sanskrit words – Patta (canvas) and Chitra (picture) – and it basically means a picture painted on a canvas. This cloth-based scroll painting is most commonly practiced in Odisha and West Bengal. Known for its fine details, bright colors, mythological themes, and folklore, Pattachitra is among the most beautiful Indian folk arts. The artists (called chitrakars) use only natural products for creating Pattachitra and give it a lacquer coating. Thus, the Pattachitra paintings get a glossy finish, making them even more attractive.

Warli art or Madhubani paintings; all Indian folk arts make for some great souvenirs that you can buy during your travels across the country. Planning your India trip? Get the cheapest deals on flight tickets to India at Indian Eagle.

While food is a major part of every celebration - be it a big or small event, a major festival or a fair -...
Culture

What is Homecoming?  Noun A reunion of students returning to a school, college or university.  Being a student is one of the best phases of a human...
Culture

One of the unique cultural events in India is the bright and colorful Tawang Festival. Organized by Arunachal Pradesh Tourism Department to showcase the...