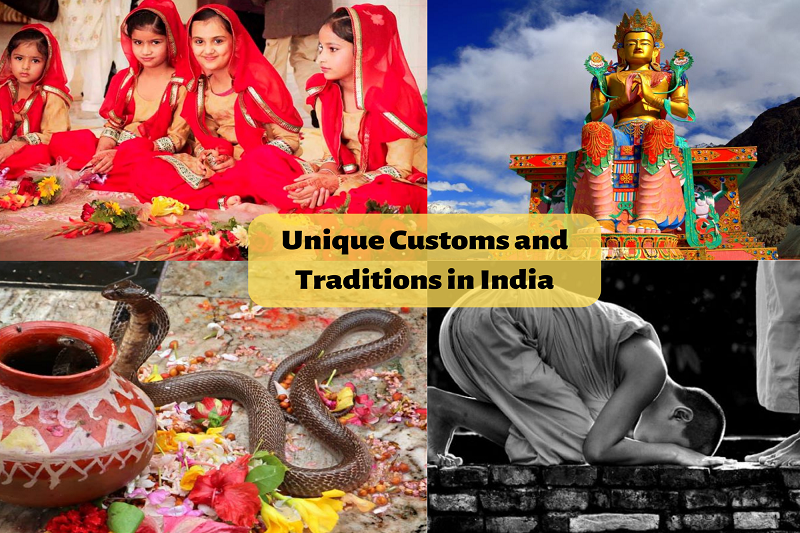 If there is something that sets India apart from other countries in the world, it is the country’s rich and varied culture. Every country has its own culture, but the culture of this ancient land – a beautiful amalgamation of different cultures from different states – is something that totally mesmerizes and might even baffle someone who doesn’t belong here. But if you go a little deeper to trace the origin of various cultural traditions of India, you are most likely to be left surprised at the discoveries, the religious, philosophical, or spiritual explanations behind most of the Indian customs and traditions. Here we take a look at some unique customs and traditions in India, which you might be interested to know ahead of your India trip.

Indians place elderly people on a higher pedestal, often next to God, and treat them with the utmost respect. Kids in the family are taught from an early age to touch the feet of the elderly people in the house (parents, grandparents, and relatives) before leaving and after arriving home. This is a common practice in every traditional household in India. Blessings and good wishes are often sought from elders in this way on special occasions like birthdays, festivals, weddings, etc.

You can witness some of the interesting customs and traditions in India during various festivals that this country celebrates. Kanya Puja, a significant part of the Navratri festivities, is one such interesting ritual in which nine young girls are revered by washing their feet and offering new clothes. These nine girls are treated as the embodiment of the nine forms of Goddess Durga. Hinduism places a lot of importance on the feminine and worships feminine power in one way or the other.

If you are surprised to know that Indians offer prayers to snakes, let us tell you that there is a festival dedicated to the worship of snakes called Naga Panchami. It is celebrated on the fifth day of Shravana month according to the Hindu calendar. A snake that adorns Lord Shiva’s neck is integral to his divine aura, and hence Shiva bhakts (devotees) visit nearby Shiva temples on this day. Many people observe Naga Panchami by bathing Naga devata’s idol in milk and some also offer milk to real snakes, especially cobras, on this day. A story in the Indian epic Mahabharata narrates how this festival originated and several legends in folklore also tell the significance of worshiping snakes.

Reciting sacred Buddhist texts is an everyday tradition in the monasteries and villages of Jammu and Kashmir’s trans-Himalayan Ladakh region. Buddhist lamas (priests) and monks dress themselves up in special costumes for this orchestrated musical recitation and their different hand gestures (mudras) during the recitation represent Buddha. The chanting is done for spiritual reasons and is believed to invoke the blessings of Lord Buddha. In 2012, this traditional custom of India was included in the UNESCO Representative List of Humanity’s Intangible Cultural Heritage

Tamil Nadu’s Thimithi ceremony involves one of the strangest customs and traditions in India. During this festival dedicated to Draupadi, the wife of the Pandavas in the epic Mahabharata, Draupadi’s walk across a bed of ember and her coming out of it unhurt is celebrated by reenacting the same. Devotees walk barefoot on a bed of burning coal while also balancing a pot of milk or water on their heads. The locals believe that Draupadi Amman (worshiped as the village Goddess) grants the wish of those who perform this act with utter devotion. This festival is held in villages across Tamil Nadu, usually a week before Diwali, which falls in October or November. So, if you are wondering how they do this, you must consider flying to India during the festival season to watch it yourself.

If you are visiting Delhi between 13th to 16th October and interested in art then an exciting event awaits you. India Art Festival Delhi...
Culture

विश्व संस्कृत दिवस: a day honoring a scared language. World Sanskrit Day – विश्वसंस्कृतदिनम् – is about celebrating an old language. A salutation to its...
Culture

India is gearing up for a grand-scale celebration of the 75th Independence Day this August 15! The country has already been marking the diamond...
Culture

Dwarka – the city chronologically significant to the life of Krishna. The city that submerged in the sea and an era was over. The...
Culture

Food Places in Kochi to Explore the Distinct Food Culture

Kochi is one of the best places in India that will let you explore the true beauty of nature and the culture around the...