The Significance of the Holy Amarnath Yatra 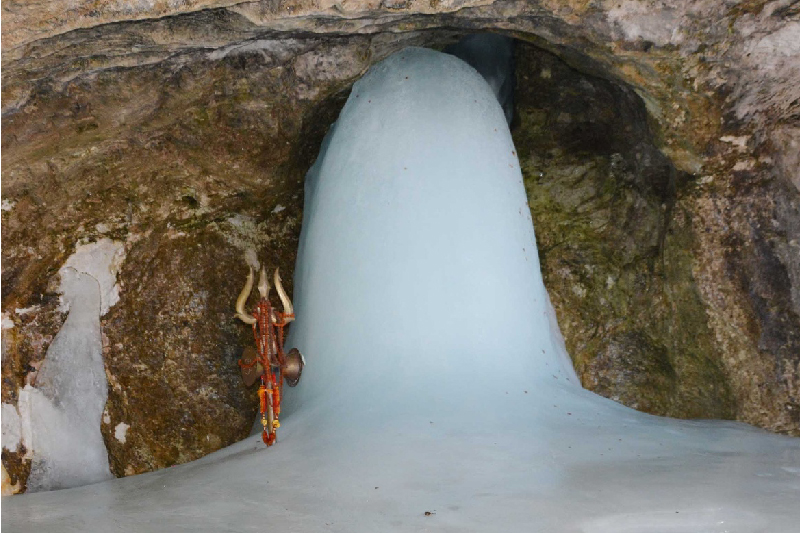 The Amarnath Shrine is one of the holiest places to see in India. It is visited by millions of Hindu pilgrims every year. Although it couldn’t take place in 2020 and 2021 due to the COVID-19 pandemic, the Amarnath Yatra resumed from this year.
Hindus believe that Lord Shiva will bless the people who go on the Amarnath Yatra and so, many wish to go on this pilgrimage at least once in their lifetime.

The Legend of Amarnath Yatra

So, what is the story behind the holy pilgrimage? According to a popular belief, the Amarnath Cave is the very place, which Lord Shiva visited to narrate the Amar Katha to Goddess Parvati. He wanted her to keep it as a secret. It is also said that Lord Shiva didn’t bring any of his companions to the cave – be it his Vahana (mount) Nandi bull, who was left at Pahalgam, the moon on his head was left at Chandanwari. The snake, which generally surrounds his neck, was at Lake Sheshnag. The basic essentials of life he used to carry were left at Panchtarni and his son, Lord Ganesha was left behind at the top of Mahaguna.

Later when Lord Shiva finished narrating the story, he realized the Goddess Parvati didn’t hear it and had fallen asleep but a parrot nearby listened to the story instead. He got angry and in a fit of rage, threw his Trishul to kill the parrot. It is also believed that in order to save himself from being killed, the parrot entered the body of Rishi Ved Vyas’s wife. And the child born later was named Shukadev who went on to become a learned sage.

There is another popular legend according to which a pair of pigeons (and not the parrot) who heard the story, became immortal and now they can be seen inside the cave by many pilgrims. Their sighting is considered extremely auspicious by the devotees.

Significance of the Amarnath Yatra

It’s a known fact that there is a block of ice in the Amarnath Cave that is formed in the shape of a Shivling. Scientists say that the formation was a result of ice dripping from the roof of the cave while the Hindu devotees believe that Lord Shiva is present there in the form of a Lingam. It forms every year; the length of it also changes.

Surprisingly, it is said (as per visitors’ observations) that the Lingam expands and contracts based on different phases of the moon. No one is sure though why it happens and there is also no scientific proof regarding this as of now. Pilgrims can also find two other ice formations, which they believe are Lord Ganesha and Goddess Parvati. The legend attached to the shrine makes it very significant to those who believe in it.

The Amarnath Yatra 2022 was suspended for 2 days due to the cloud burst and resumed from July 11. While nearly 15,000 pilgrims were rescued safely, around 16 people lost their lives in the flash floods and almost 37 were injured. Despite the perilous journey, it remains one of the most famous places in India.

The Amarnath Yatra began on 30th June and is likely to end on 11th August. It spans for almost 45 days and attracts devotees from all around the world.

India is a land of such mystical pilgrimages and shrines along with countless other attractions. You can book flights to India via Indian Eagle and experience its many wonders.

Are you interested in going on the Amarnath Yatra next year? If yes, then plan ahead; a few months for the preparation should be ideal.

Dwarka – the city chronologically significant to the life of Krishna. The city that submerged in the sea and an era was over. The...
Culture

Food Places in Kochi to Explore the Distinct Food Culture

Kochi is one of the best places in India that will let you explore the true beauty of nature and the culture around the...
Culture

Warangal – a city that emerged from a rock. When the artists’ hands chiseled away one mighty rock; a historical town was birthed. Named...
Culture

Things You Should Know About India Before You Go

It is for a reason travelers who have visited India often say that this country is full of surprises and that India travel is...
Events

If you are a melophile or simply have an interest in all things culture and trends then here’s a news for you:  Lollapalooza, India...