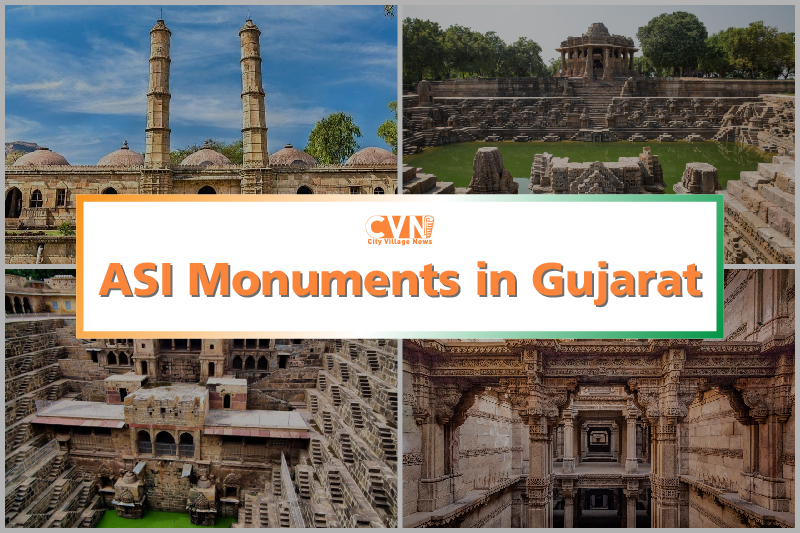 India is gearing up for a grand-scale celebration of the 75th Independence Day this August 15! The country has already been marking the diamond jubilee of Indian Independence with a wide variety of events under the Azadi ka Amrit Mahotsav campaign. Recently, the Ministry of Culture, GOI, has announced free entry (for both Indians as well as foreigners) to all heritage monuments in the country protected by the Archaeological Survey of India (ASI). This means you can visit any of the 3,600 ASI-protected monuments spread across India for free until August 15, 2022. If you are flying to Ahmedabad in the days leading up to I-Day, do visit these ASI monuments in Gujarat for free during your heritage tour of the state. 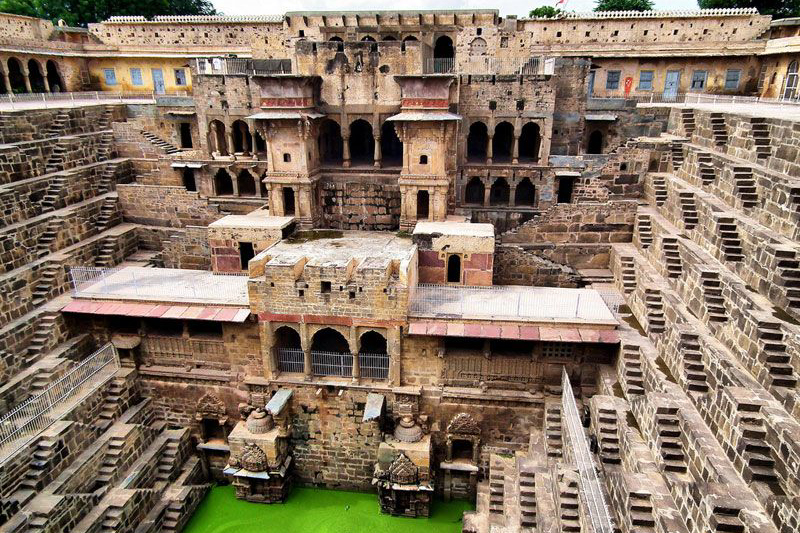 An architectural masterpiece, Rani ki Vav (Queen’s Stepwell) takes your breath away at first sight! Built in the Maru-Gurjara style of architecture, this UNESCO-listed stepwell was designed like an inverted temple as if enshrining water, which is considered sacred in Hinduism. Rani ki Vav is said to be the oldest and grandest stepwell in Gujarat. It measures 65 meters in length, 20 meters in width, and 28 meters in depth, and the seven stories of this stepwell feature thousands of spectacular sculptures, major and minor, with religious, mythological, and spiritual themes. This stepwell faded into insignificance for years when a massive flood caused by the Saraswati River silted it up. It was rediscovered after several decades and restored by the Archaeological Survey of India (ASI). 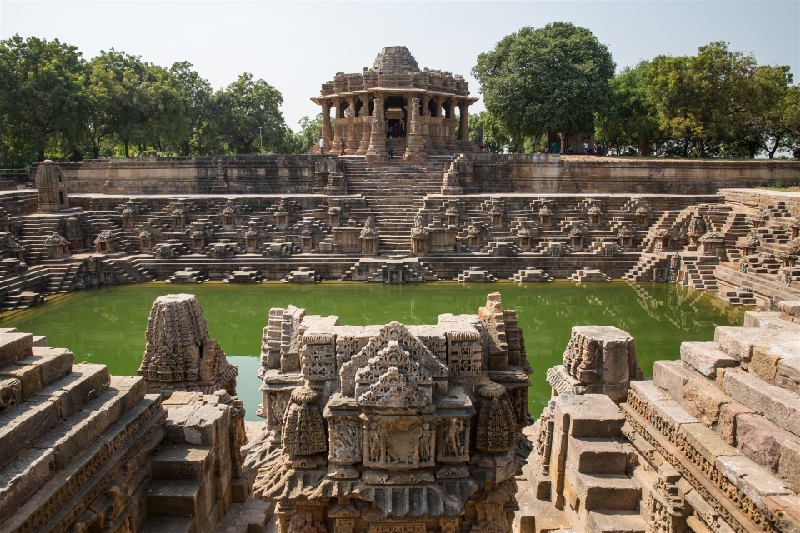 Modhera, a small village situated in the Mehsana district of Gujarat, is home to the only other sun temple in India besides Odisha’s Konark Temple. Thus, Modhera Sun Temple is one of the most important ASI monuments in Gujarat. It is known for its mind-blowing medieval architecture and mystical ambiance that soothes your soul. Intricate carvings of various gods, goddesses, animals, artists, and other theme-based sculptures adorn the entire temple complex, which consists of a sanctum sanctorum, an assembly hall, and a step well housing several smaller shrines. Daily prayers do not happen here, but visitors will be allowed to explore the temple complex. 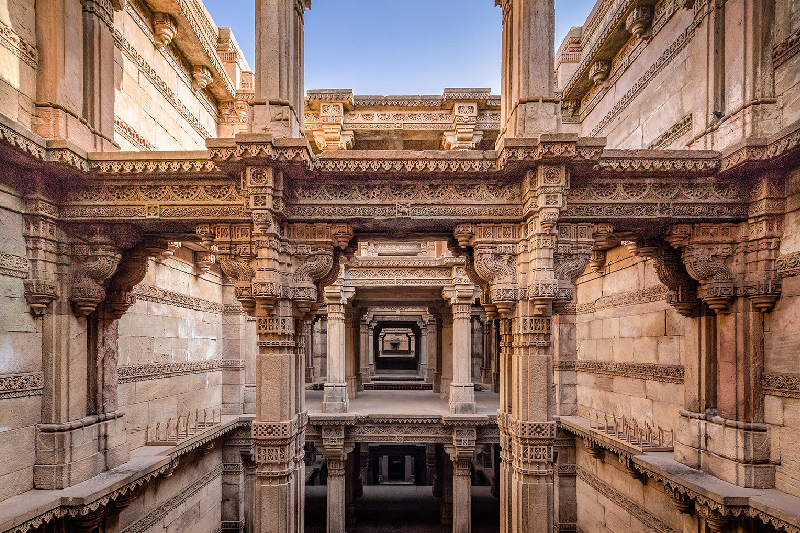 Gujarat is a land of many beautiful step wells. Considered to be some of the greatest feats of engineering and architecture, these stepwells are must-visit attractions in Gujarat. The 15th-century Adalaj ni Vav in Gandhi Nagar is one such wonder! This five-storied stepwell built in sandstone has both Hindu and Islamic architectural influences. It is designed in such a way that the sunlight doesn’t fall on the steps except at noon. The three sets of entrance stairs, an underground story with an octagonal opening, and ornately carved walls and arches are some of the highlights of Adalaj Stepwell. 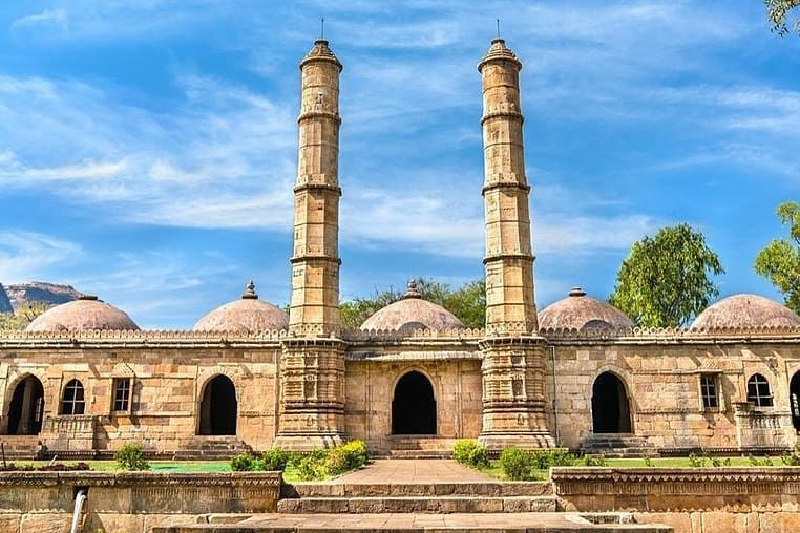 A UNESCO World Heritage Site, Champaner-Pavagadh Archaeological Park is one of the best ASI monuments in Gujarat that you can explore for free as part of the 75th Independence Day celebrations. Spread across 1,329 hectares at the foot of Pavagadh Hill, this park is scattered with a number of historical, archaeological, and cultural sites that extend into the historical city of Champaner right from Pavagadh Hill. The collection of prehistoric settlements and medieval-era building complexes include forts, palaces, citadels, gates, arches, temples, mosques, tombs, stepwells, tanks, agricultural structures, etc. The Kalika Mata Temple perched on top of Pavagadh Hill is another top attraction here, which is visited by a lot of pilgrims every year!

The state of Gujarat boasts of having more than 200 ASI-protected sites. This Independence Day, visit as many ASI monuments in Gujarat as you can and learn more about the heritage of this beautiful state. Find cheap last-minute flight deals to Ahmedabad from Los Angeles and other US cities at Indian Eagle, and book your tickets now!

Previous article
About Taj Mahal: the Appeal and the Mystery
Next article
6 Exceptional Train Journeys in India You Must Try