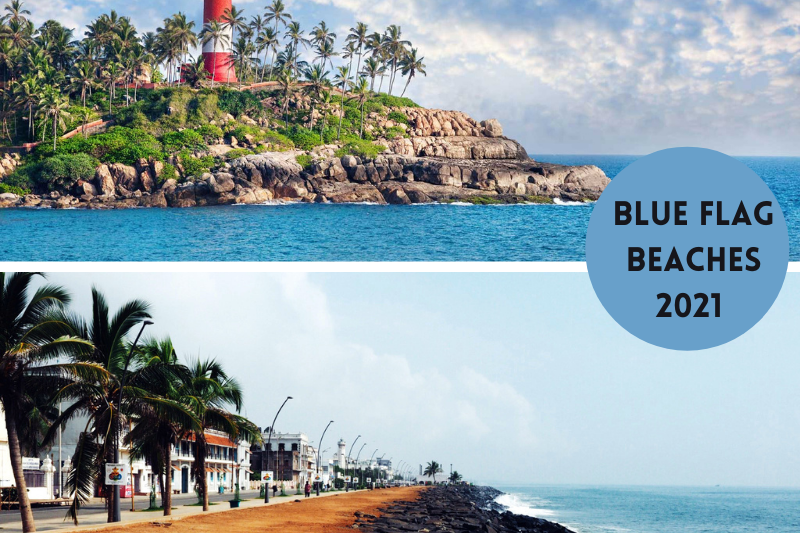 Less than a year ago, 8 Indian beaches were conferred with the coveted “Blue Flag” certification marking India’s debut in the list of blue flag nations, i.e, nations with blue flagged sites. Two more beaches – Eden in Pondicherry and Kovalam in Tamil Nadu – are the latest additions to this burgeoning group of blue flag beaches in India. Wondering what this tag means? To begin with, blue flag beaches are considered the cleanest beaches of the world. Such beaches operate on ecotourism models, contributing immensely to the sustainable development of the area. Now, let’s get into the details.

What is Blue Flag Certification?

Blue flag is an internationally recognized eco-label awarded to beaches, marinas, and sustainable boating tourism operators across the world. A non-profit, non-government organization known as the Foundation for Environmental Education (FEE), headquartered in Copenhagen, Denmark, presents the blue flag certificate to beaches, marinas, and tourism boats after careful evaluation across environmental, educational, safety, and accessibility criteria. This label is a reward for commitment to high environmental and quality standards.

The jury that takes the final call is composed of renowned members from the World Tourism Organisation (WTO), UN Environment Programme (UNEP), Foundation for Environmental Education (FEE), and International Union for Conservation of Nature (IUCN).

Which country has the highest number of blue flag beaches?

With 615 blue flags flying over its beaches, Spain has the highest number of blue flag beaches than any other country in the world. (A total of 4820 beaches, marinas, and tourism boats from around 49 countries have been blue flagged so far).

What are the 10 blue flag beaches in India?

Spread across 6 states and 3 union territories, here are the 10 beaches in India where the blue flag is hoisted.

How many of these beaches have you been to before they were awarded a blue flag certificate? Not many? No worries! Plan your next beach vacay to these blue flag beaches in India and find incredible flight deals at Indian Eagle.

Why haven’t Indian beaches been awarded this prestigious certificate until 2020?

India had sowed the seeds for its beaches to be qualified for the blue flag certification on World Environment Day 2018 with the launch of Beach Environment and Aesthetics Management Services (BEAMS). This is an initiative of the Integrated Coastal Zone Management (ICZM) project aimed at conservation and sustainable development of coastal regions. The rigorous efforts of the Ministry of Environment, Forest and Climate Change for 2 years resulted in India becoming the first blue flag nation to have received blue flag certificates for 8 of its beaches at once. And now, the Ministry plans to exponentially increase the number of blue flag beaches in India to 100 within the next five years.

For someone who suffers from travel sickness, the most challenging part of an India trip seems to be sitting through the long flight to...
News

With a wide variety of tourist attractions on offer, India is a place that caters to different types of travelers. There are natural wonders,...
News

Air India Express owned by Tata Sons might now see a new addition of four Boeing 737 airplanes in its fleet. At present, the...
News

You may be wondering if refugees are admitted to the United Kingdom based on their race or social group. Well, this article will discuss...