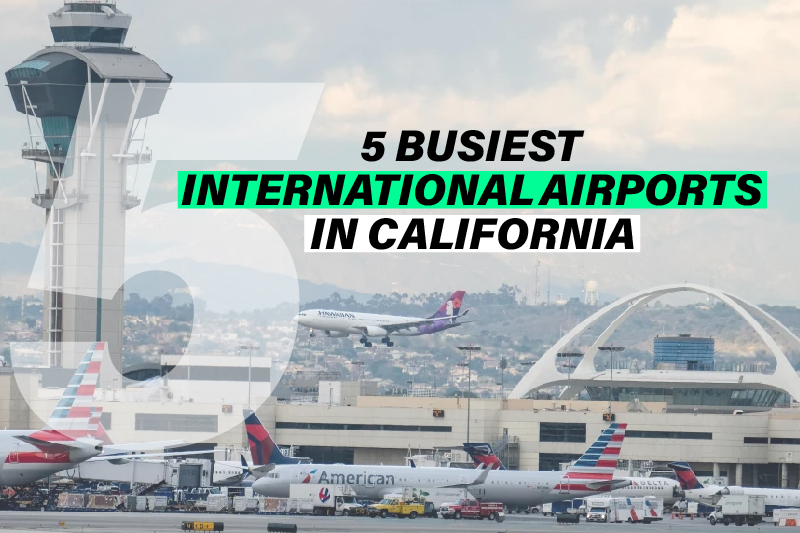 The main airport serving the Los Angeles Metropolitan area, LAX is located 18 miles southwest of downtown Los Angeles. Covering an area of 3,500 acres, the airport features 9 passenger terminals and 4 parallel concrete runways (whose length ranges between 2,700 to 3,400 m). As the largest and busiest airport on the West Coast of the United States, the airport serves as a gateway to the rest of the country. Los Angeles International Airport served 48 million passengers in 2021 and became the fifth busiest international airport in the world, as per the report released by the Airports Council International (based on the 2021 flight data). This airport is a hub for several airlines, including Delta, American, Alaska, and United Airlines.

San Francisco International Airport is the second-busiest international airport in California after LAX Airport. It has four runways and four terminals. SFO Airport handled around 13.7 million passengers in 2021. The airport connects the Bay Area with various cities across the US, Europe, the Middle East, Australia, and Asia. The airport operates nonstop flights to more than 125 destinations around the globe, including direct flights from SFO to Delhi and Bengaluru in India.

Formerly called Lindbergh Field, San Diego International Airport is located three miles away from downtown San Diego. It primarily caters to domestic travelers but is also connected to certain international cities in the UK, Europe, Mexico, Canada, and Japan. As the second busiest airport in the world with a single-runway, SAN Airport is one of the most important international airports in California. Many premium airlines such as United, Delta, Alaska, and Southwest airlines have their hub at San Diego International Airport.

Sacramento International Airport is the main entry point to the Greater Sacramento Area. It is spread across 6,000 acres of land, and has two terminals and two parallel runways. Several airlines such as Air Canada, American, Delta, United, Southwest, Hawaiian, and JetBlue operate flights from SMF Airport to different US cities as well as some international locations. Being the nearest airport to popular tourist attractions in the USA like Yosemite National Park, Napa Valley, and Lake Tahoe, Sacramento International Airport also welcomes a lot of domestic and international travelers.

The second-largest international airport in the San Francisco Bay Area, Oakland International Airport is well-connected to all major US cities and a few global destinations. It is one of the busiest airports in California in terms of domestic passenger traffic. OAK Airport has two terminals and four runways, out of which three are for commercial use and one for cargo operations. The airport is situated on Bay Farm Island, at a distance of about 10 miles from downtown Oakland. JSX and Southwest Airlines are the two main airlines serving Oakland International Airport.

If You are Flying Between India and California

How many international airports are there in California?

There are more than 10 international airports in California, a state whose total number of major and small airports crosses 200.

What are the major airports in California?

Here is a list of the 12 major airports in California:

What is the most popular route between California and India?

Which airlines fly between California and India?

The first airline in the world began in Europe – specifically, Germany – and was named Deutsche Luftschiffahrts-Aktiengesellschaft I, with the acronym DELAG, founded...
Travel

The city of dreams, Mumbai, turns even more magical when it rains. It is one of the most beautiful places in India that you...
Travel

When we do the same thing over and over, it becomes boring and repetitive. If you're tired of the same old routine of partying,...

Previous articleSlow Travel: Some Useful Tips and Benefits
Next articleAll that is Good and Bad with the Disney Elite Tour