Dhanushkodi, the Last Land of India 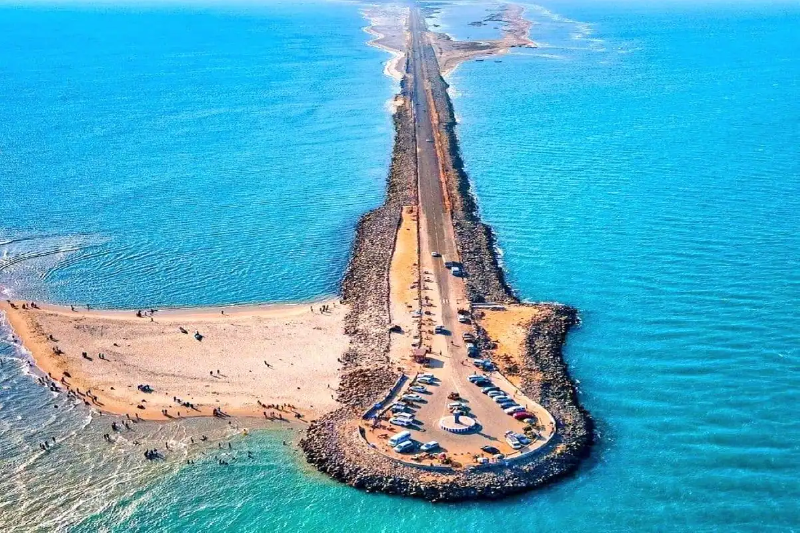 A narrow stretch of land at the southeastern tip of the Rameshwaram Island in Tamil Nadu; Dhanushkodi barely covers 50 yards and juts out into the Gulf of Mannar just like an arrow ready to be released.  Dhanushkodi, the last land of India, might merely be a lost land post the devastating 1964 cyclone, with nothing much to offer in terms of tourist attractions, but its immense raw beauty and mythological significance make it a must-see place in Tamil Nadu.

A Brief History of Dhanushkodi

Located about 20 km from Rameshwaram and separated from the mainland by Palk Strait, Dhanushkodi had been a bustling town with all basic amenities and its own railway station until a cyclone (with tidal waves rising as high as 20 feet) wreaked havoc on this quaint little town on an ill-fated night in 1964.  The entire town got washed away and what remains of this once-prosperous place is a sandy shoreline filled with remnants of its lost glory – the ruins of ancient temples, churches, and other monuments besides a wrecked railway station and a post office. Except for small groups of fishing communities living in makeshift thatched huts, this place is largely uninhabited. You may also find one or two tea stalls and other shops in the abandoned town of Dhanushkodi, the last land of India.

While other places hit by severe natural calamities in the past have recreated their identity with time, Dhanushkodi seems to be content with its raw originality, even if it means nothing more than being a lost land. Time too seems to stand still in this abandoned town, as if conceding to Dhanushkodi’s reluctance for a makeover.

What is Dhanushkodi Famous For? 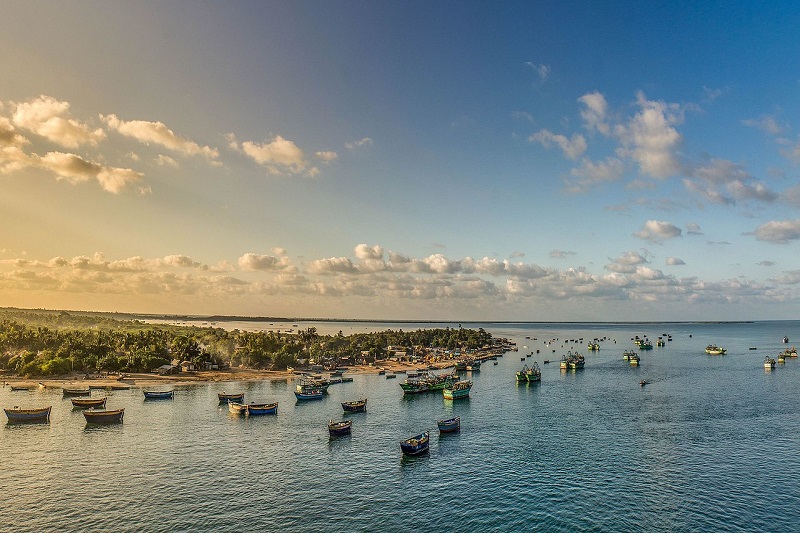 For all its deserted state, Dhanushkodi still manages to attract travelers with its silent shores, spellbinding sunrises/sunsets, and expansive ocean views. The ancient ruins of its heritage monuments add a certain charm to this forsaken town. More than anything, travelers visit Dhanushkodi, the last land of India, for the sacred Ram Setu – engulfed by the ocean and shrouded deep in mystery.

Ram Setu starts at the point where Dhanushkodi’s landmass ends and extends into the sea all the way to Sri Lanka, located about 30 miles away. This bridge-like causeway connects Rameshwaram Island in India with Mannar Island in Sri Lanka. Certain historical accounts state that Ram Setu stood above water and was walkable until the 15th century. It was later submerged (but would appear on a low tide) after a cyclone hit the area in the 15th century.

According to mythology, this link between India and Sri Lanka was established by Lord Rama together with Vanara Sena to reach Devi Sita, who was held captive by Ravana on the other side of the sea.

Whether this fairly continuous network of natural limestone shoals is natural or human-made is still a subject of controversy; but the experience of standing at the spot of this mystical creation is surreal, to say the least. Not just the sentinel remains sprinkled across Dhanushkodi, but the stern silence enveloping this town also seems to be telling stories of time immemorial.

What Else Can You Do in Dhanushkodi?

Dhanushkodi, the last land of India, is the place to bask in the tranquility of nature. Walk around the hauntingly calm town and as you do so, explore the magnificent remnants, including that of a post office, railway station, church, and temple.

Head to Dhanushkodi Beach to witness the magical confluence of the Indian Ocean and the Bay of Bengal. The ride in a jeep to this sandy beach gets dreamy as it progresses, with a thin sandy stretch trailing the straight strip of tarmac on both sides, beyond which extend the vast oceans, the calm Bay of Bengal to the left, and the roiling Indian Ocean to the right.

Explore Arichal Munai (Erosion Point) and admire the beautiful view of the sun sliding down at the horizon. At the endpoint, literally the last land of India, stands the Ashoka Emblem. From here you can look out across Ram Setu, and you might even catch a glimpse of the Sri Lankan Coast.

Kothandaramaswamy Temple is another place to visit near Dhanushkodi. It is said that Lord Rama conducted Pattabhishekam (coronation ceremony) to Vibhishana at this temple after defeating Ravana. Surprisingly, this temple is the only structure in the area to have survived the ravages of the 1964 Rameswaram Cyclone.

How to Reach Dhanushkodi

Madurai Airport, located 200 km away from Dhanushkodi, is the nearest airport. International travelers can book their flight to Chennai and then catch a domestic flight to Madurai. One can take a train to Rameshwaram from Madurai or directly from Chennai. Bus services are available to Dhanushkodi from Rameshwaram. But the last leg of the journey to this ghost town is possible only via jeeps or modified vans. The not-so-smooth journey along the sandy route is scenic nonetheless.

A tour of this abandoned town may be a short affair but leaves a lasting impression on your travel memories. So, get ready for a memorable trip! Book Indian Eagle flights and come explore Dhanushkodi, the last land of India.

Previous article
Zomaland Pune Receives Huge Response; the Food Carnival to Come to These Indian Cities Next
Next article
Rann Utsav: Get a Glimpse of Kutch’s Unique Culture