The Giants Ruling the Skies: 5 of the Largest Planes in the World 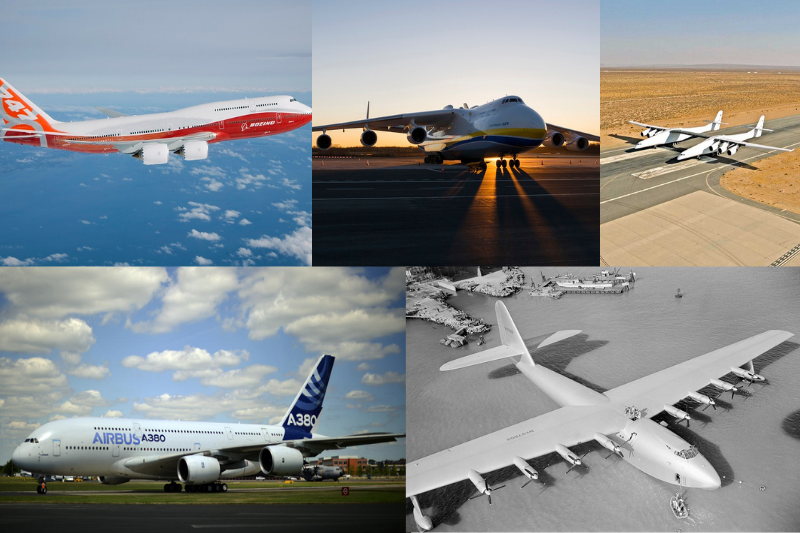 Flying in the air was nothing less than a wild dream until the airplane was invented in the early 20th century. Fast forward to the 21st century, airplanes can fly us from one end of the world to the other. The evolution of aircraft since then has further revolutionized the aviation sector. Now, when we hear about the largest plane in the world that is bigger than an American football field, it hardly surprises us. But as curious beings, we always love to hear such facts, don’t we? So, here is a rundown of 5 of the biggest aircrafts in the world, their specifications, and other details. Continue reading!

A colossal plane that can occupy an entire football field, Antonov AN-225 has a huge fan base even among laypersons with an interest in aviation. A marvel of engineering, this strategic airlifter fondly called Mriya (a Ukrainian word for ‘dream’) features six turbofan engines and 16 pairs of wheels. It was built for transporting the space shuttle for the Soviet space program. Only one of its kind, Antonov AN-225 held several records, including the biggest plane in the world and the heaviest aircraft ever built. Although recently destroyed (in the ongoing Russia-Ukraine war), this list begins with Antonov AN-225 because talking about the largest planes in the world without a mention of Mriya feels incomplete.

Nicknamed the Super Jumbo, Airbus A380 is the largest passenger plane in the world. This large capacity double-deck aircraft was introduced into the market in 2007 as a rival to Boeing 747 Jumbo. Though Singapore Airlines got hold of the first Airbus A380 in October 2007, Emirates is its biggest customer with 123 A380s in its fleet, with the last Super Jumbo delivered on December 16, 2021. Recently, Airbus has successfully operated its maiden Airbus A380 powered by 100% Sustainable Aviation Fuel (SAF). The aerospace company hopes to reduce the carbon emission from commercial planes by achieving 100% SAF certification by the end of the decade.

One of the world’s most popular commercial aircrafts, the Boeing 747-8 is the biggest in the 747 family. Equipped with an enlarged fuselage, redesigned wings, and new engine technology, this is the largest and heaviest aircraft manufactured in the United States. It was the largest passenger plane in the world until Airbus A 380 replaced it in 2007. However, this wide-body double-deck airliner still enjoys the title of the world’s longest aircraft in operation. It comes in two versions – passenger (747-8 Intercontinental) and cargo (747-8 Freighter). The operators of Boeing 747-8 include premium airlines such as Lufthansa, All Nippon Airways, Qatar, Korean Air and Air China.

The largest flying boat ever constructed, Hughes H-4 Hercules was built upon the US Government’s request for a cargo and troop carrier to be used in World War II. Also called the Spruce Goose, it was built entirely out of wood owing to the wartime restrictions on the use of aluminum. Hughes H-4 Hercules was designed to transport 68,000 kg, 750 equipped troops or two 30-ton M4 Sherman tanks over long distances, however, it couldn’t serve the purpose as it wasn’t completed in time. Hughes H-4 Hercules flew only once in 1947, for a brief 26 seconds. Now, it can be spotted in the Evergreen Aviation & Space Museum in Oregon. You can take a look at this all-wooden aircraft when you fly to USA.

With its gigantic wings measuring 117 meters, Stratolaunch has the longest wingspan of any plane in the history of aviation. Its other notable features are a unique double-fuselage design, 28 wheels, and six engines. Conceptualized to launch hypersonic and aerosonic vehicles into space, it is one of the largest aircrafts in the world. And can you guess its codename? It’s Roc – a mythical bird that is said to hunt and carry away giant animals like elephants. Stratolaunch soared at an altitude of 14,000-feet during its successful second test flight last year.