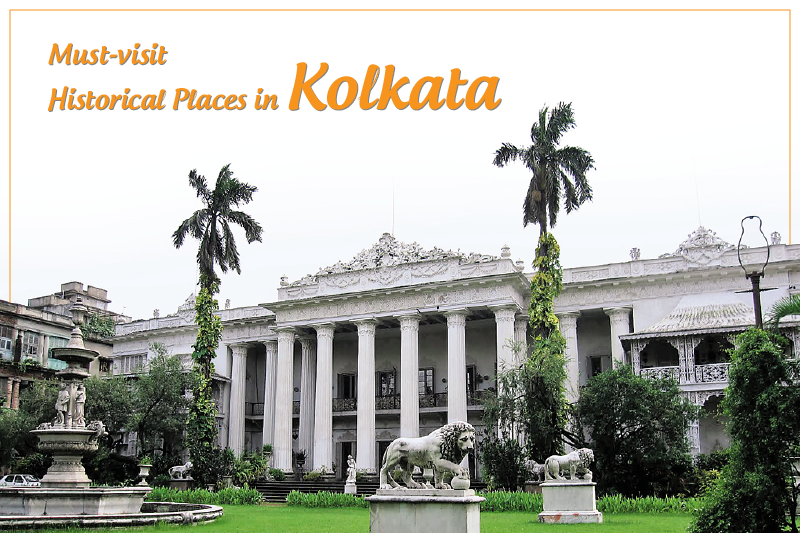 Kolkata, the City of Joy, is well-known for its artistic brilliance, outstanding architecture, and iconic literary surroundings. You must visit this city at least once due to its diverse and vibrant culture. This city is well-known for its culture, art, music, and delectable cuisine, but it also has a rich historical heritage. The beautiful historical places in Kolkata depict the city’s glorious past. Its historical relics retain the enchantment of the British era.

Marble Palace Mansion is a 19th-century mansion in North Kolkata’s Chor Bazar. In 1835 Raja Rajendra Mullick built this mansion. The Marble Palace houses a famous art collection of Reuben’s masterpieces as well as paintings by eminent international artists such as Reynolds, Van Gogh, and Rembrandt. The palace is one of the famous monuments of Kolkata and is well-known for its stunning marble walls, floors, and sculptures. The mansion also includes a zoo with a variety of rare animals and birds.

The Indian Museum, the world’s ninth oldest museum, is located in Kolkata, the capital of West Bengal. It is also known as the Imperial Museum of Calcutta. In 1814, the Asiatic Society of Bengal established India’s largest museum, which has since become a centre of multidisciplinary activities. The Indian Museum, also known as Jadughar, houses some rare collections of antiques, armor and ornaments, fossils, skeletons, mummies, and Mughal paintings. In addition, the Indian Museum houses some of the finest collections of contemporary paintings, sacred Buddha relics, Egyptian mummies, and ancient sculptures.

Also Read: Local Landscapes: Things to do in Kolkata via its Streets

When you imagine Kolkata, one of the first things that come to mind is the Howrah Bridge. The journey to Kolkata would be incomplete without a stop at the Howrah Bridge. This city’s iconic landmark is a massive steel bridge that spans the Hoogly River. This is the world’s third-longest cantilever, also known as Rabindra Setu. This bridge’s construction without a single pylon makes it one of the most unusual historical places near Kolkata. The Howrah bridge connects Kolkata with its twin city Howrah, carrying approximately 150,000 vehicles and 100,000 pedestrians daily. Furthermore, the night view of the Howrah Bridge is priceless, as it comes to life with alluring gleaming lights.

Another popular landmark in Kolkata is this early-nineteenth-century heritage building. Nizam Palace, formerly known as Galstaun Park, is one of Kolkata’s historical wonders that has stood tall, strong, and proud for centuries. This palace was also visited by King Edward VIII. This palace served as a hospital during World War II. J.C. Galstaun built this mansion as a tribute to his lovely wife and later named it Galstaun Park in 1933.

Victoria Memorial, built during the British era, is one of the famous monuments of Kolkata. It is also a Kolkata heritage site, displaying the city’s colonial history. This magnificent white marbled structure was built between 1906 and 1921 to commemorate Queen Victoria’s 25-year reign in India. Victoria Memorial covers 64 acres and is surrounded by large and magnificent gardens. It is now a museum with a fine art history collection and a gallery from the British Colonial period, which contains many impressive paintings, sculptures, and books. The exterior of the building is magnificently illuminated at night. Another eye-catching feature of this location is the colorful light and sound show that takes place in the evening.

Kolkata is an excellent destination for literature and history lovers because of its amazing history, rich culture, and literature. These are some of the most popular historical places in Kolkata.

Are you planning a trip to these stunning locations from Dallas? Indian Eagle offers low-cost flights from Dallas to Kolkata. So, what are you holding out for? Plan a trip to this lovely city to experience the true essence of the City of Joy. Without a doubt, the magnificent architecture and craftsmanship of these incredible places will leave you speechless.

Previous article
Travel Guide to Trivandrum to Discover the Mesmerizing City
Next article
Celebrating Lord Ganesha: A Paean to the God who Removes Obstacles