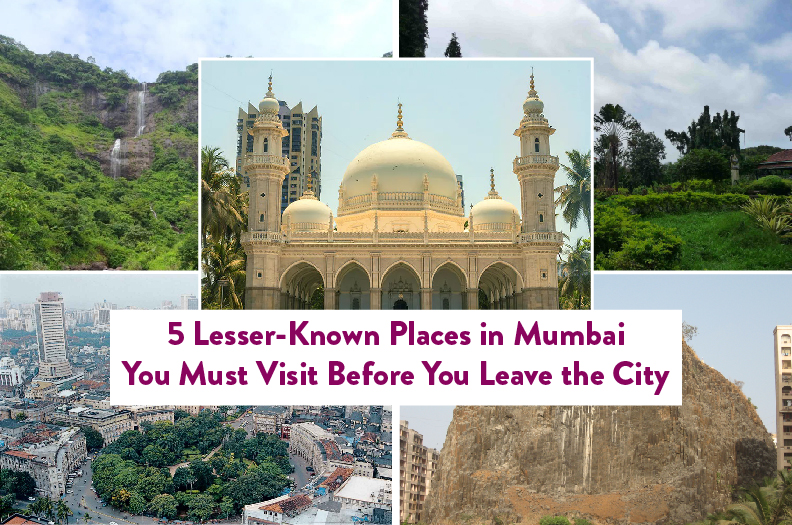 Planning to fly to Mumbai?

Are you bored of seeing the same things in the capital of Maharashtra as you did several times before? Do you want to see something new in the city this time around?

You’ve come to the right place.

Mumbai is definitely one of the popular cities in India, hence every tour guide and book will give you a list of places that you might have visited over and over. In this article, you can read about the lesser known places in Mumbai.

A dargah is Persian for a shrine or a tomb built over the grave of an Islamic saint, especially a Sufi saint. The Hasnabad Dargah, located in Byculla, is a monument of awesome architecture—rich in culture, history, and beauty. This dargah houses the life after death of the Sufi saint Aga Khan Hasan Ali Shah.

It is important to note that only the followers and descendants of Aga Khan are allowed to enter the tomb and pay respects to Hasan Ali Shah. However, you can admire it from the outside. It is one of the places in Mumbai that is away from the noise of the city; perfect for some peace and quiet.

Gilbert Hill is the third oldest hill that has stood the test of time; the first two are the national monuments in Wyoming and California. Being about 200 feet tall in height, Gilbert Hill is one of the best tourist places in India. Evidence suggests that a volcanic eruption of over 66 million years ago had resulted in the rise of a gigantic monolithic rock that forms Gilbert Hill.

The shrines of two goddesses – Gaondevi and Durga Mata – are located at the top of this hill. The trail on the hill towards these shrines has beautiful scenery on the way; one can choose to either ride by car or trek. This place is very peaceful and quite far away from the hustle and bustle of city life, hence a great getaway for a while.

Ever been to the state of Jammu and Kashmir in northern India? If yes, then this hidden place in Mumbai, on the Mumbai-Ahmedabad Highway will be rather familiar to you. It is called “Chota Kashmir” for a reason—the massive greenery that is a sudden shift from concrete regions is what reminds one of Jammu and Kashmir. Hence, it got its name.

And since it is far from the noises of the city in Aarey Colony , it is one of the ideal places in Mumbai for gaining a sense of peace and tranquility.

There is a boat ride here that you can opt for – it is the best feature in Chota Kashmir. It is also known to be a site for shooting Bollywood films, especially at a time when doing so in Kashmir was off limits.

Horniman Circle Garden is a place in the fort district of Mumbai that was designed to be a large open space with grand buildings in the center. In the 18th century, it was known as Mumbai Green; after independence in 1947, it was renamed to honor the editor of the “Mumbai Chronicle”, Benjamin Horniman. It is now essentially a commercial zone, and a great place to visit in India.

Though the construction of the building began in the year 1821, its garden was planned only in 1869, and completed in three years. It has always been a social gathering spot for Parsis, who belong to a religion called Zoroastrianism. This religion arrived in India in the 8th century CE.

The garden is well-planned and open to visitors; it attracts a lot of nature-lovers, joggers, and walkers. There are also several monuments here that will give you an insight into the history of Bombay (as Mumbai was previously called).

Located in Kharghar, Mumbai, the Pandavkada Falls is said to have drawn its name from the family name of the epic warriors, the Pandavas. Legend has it that they once visited this place during their time in exile and took a bath in its waters. The Pandavas are associated with The Mahabharata.

The waters of Pandavkada fall from an altitude of 107 meters, coming from the Western Ghats of India. Since it is just 3 hours from Mumbai, you can take your partner or your family for a day’s outing and have a picnic lunch here. It is very peaceful and quiet here, with only the whooshing sound of the water falling on rocks, making it one of the best places in India.

Have you visited any other lesser-known places in your journey to Mumbai that are hidden or unexplored? Do comment below to let us know!

If you haven’t, you can fly to Mumbai now. Book your tickets with Indian Eagle today!