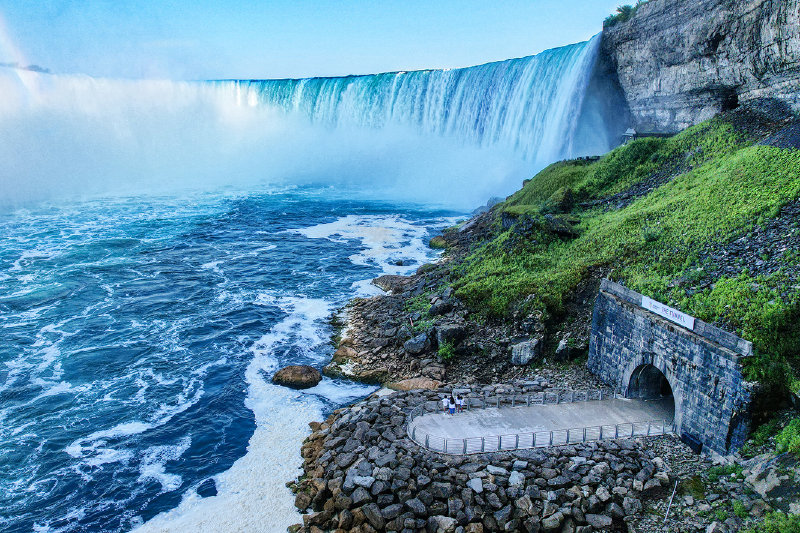 Niagara Falls is one of the well-known destinations in the USA and many tourists come here to enjoy its beautiful waterfalls and peaceful surroundings. Witnessing Niagara Falls is thrilling enough in itself, but the falls have just become an even more exciting place to visit with a tour of a tunnel under Niagara Falls’ old hydroelectric power plant.

Niagara Falls tunnel tours are now available to the public, allowing visitors to learn about the area’s history and the renewable energy produced by Niagara Falls. The new tunnel is 180 feet below the Niagara Park power station. This hydroelectric power plant, formerly known as the Canadian Niagara Power Company generating station, was once used to convert Niagara Falls water into electricity.

The tunnel beneath the Niagara Park Power Station was first mined in 1901, using basic dynamite, shovels, pickaxes, and lit entirely by lanterns. Although the station has been open for tours for many years, the tunnel has been closed for the past 16 years. The 2,200-foot-long tunnel is now opened as a museum and viewing area for visitors to the falls. During the tunnel tour, you will follow the route that water used to take through the tunnel. Not only will you discover the tunnel’s history, but you will also notice an incredible sight.

The tunnel includes a viewing platform from which you can get a picturesque view of Horseshoe Falls, Niagara Falls’ largest waterfall. Visitors will use a glass-enclosed elevator to descend the tunnel, which is fully accessible to all visitors.

This new tunnel is not only a unique and mesmerizing way to see Horseshoe Falls, but it is also an excellent opportunity to know about the history of Niagara Falls being used to generate hydroelectric power.

Previous article
7 Top Go Karting in Hyderabad to Encounter a Massive Thrill
Next article
Zomaland Pune Receives Huge Response; the Food Carnival to Come to These Indian Cities Next