A handy guide to holidaying in the Philippines! 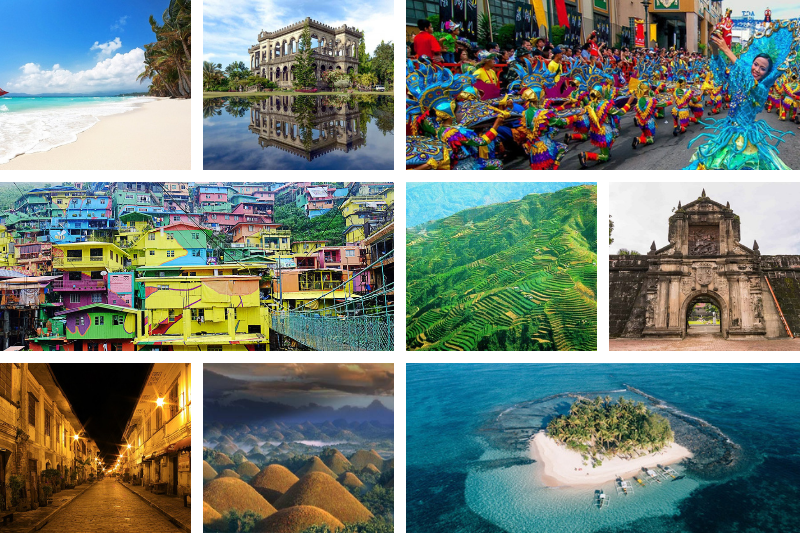 The Philippines, an archipelago of 7,641 islands, is one of the sought-after tourist destinations in the far East; the favorite for those who love the sea and mountains. With its countless attractions such as Boracay beaches, Bohol Chocolate Hills, Spanish Churches, historical Intramuros, Banaue Rice Terraces, Tubbataha Reef Park, etc., you will be spoilt for choices as to which place to visit in the Philippines. So, we are here to help you decide your travel destination based on the month you are flying to the Philippines in 2021

Considering that you are traveling to a country dubbed ‘the Capital of the World’s Festivities’ and that most of the renowned festivals, including Sinulog, are celebrated in January, it would be perfect to have ‘festivals’ as the theme of your January trip to the Philippines! Book flights to Cebu and partake in vigorous celebrations of the Sinulog festival! Witness the impressive Sinulog dance, grand parades, and indulge in the festival-special food and drinks! Also, January is the month when Iloilo celebrates Dinagyang Festival, Aklan celebrates Ati-Atihan, and Manila celebrates The Black Nazarene Procession.

Nestled in the Cordillera mountain range of Northern Luzon at an altitude of 4,810 feet above sea level, Baguio City is known for its year-long cool temperatures and thus became the Summer Capital of the Philippines! Baguio City — nicknamed ‘City of Pines’ — is the best place to visit in the Philippines in February, for the whole city livens up with celebrations of the Panagbenga Festival or Flower festival!

If you love reclusive holidays in peaceful and uncommercialized locations, Banaue is the place to visit in the Philippines! The breathtaking beauty of Banaue rice terraces can be best enjoyed in the month of April when these stair-like rice terraces carved into the mountainsides don a forest green look. It’s hard to believe that these terraces were hand-chiseled by the Ifugao people some 2,000 years ago!

It goes without saying that the Philippines, an archipelagic country, boasts some of the best beaches in Asia! One such famous beach is the White beach, the pride of Boracay island. Beat the summer heat at the beautiful white sand beaches of Boracay, a tiny island in the Visayas region. Laze around or go all adventurous and enjoy the exhilarating water sports at this Beach Capital of the Philippines!

Fly to Manila in June, the month of Independence for the Filipinos. The capital of the Philippines, replete with colonial buildings that serve as the remnants of the past and the towering skyscrapers which depict the developed facade of this metropolitan city, engages the visitors with its diverse attractions. Take the Intramuros tour and learn about the history of the Philippines! Manila Cathedral, Fort Santiago, and San Agustin Church situated in this walled city are among must-visit places in the Philippines.

When unpredictable rains in July keep sightseers from venturing to the Northern Philippines, surfers on the other hand throng the southern Siargao Island — the Surfing capital of the Philippines. Take out your surfboards and ride the high waves at Cloud 9, Quicksilver, Cemetery, Rock Island, and Daku Reef! Not into surfing? Siargao is also a perfect place to visit in the Philippines to enjoy caving, rock pooling, and island-hopping!

Davao City, a thriving city and the largest urban center in Mindanao, is one of the popular tourist destinations in the Philippines. Davao doesn’t disappoint anyone — from hikers, beachgoers, wildlife enthusiasts to foodies and shopaholics. Hike Mount Apo (the country’s highest mountain), watch endangered Philippine Eagles at Philippine Eagle Center, taste Durian fruit, spend a peaceful time at Eden Nature Park, and visit Samal Island! Visit this city in August to join passionate celebrations of the Kadayawan Festival, the biggest festival in Mindanao. Find cheap flights to Davao here!

If swimming with sea turtles and exploring the coral gardens is on your bucket list, Apo Island helps you tick that off! This beautiful island in Negros Oriental, a protected marine sanctuary, is home to 400 species of corals and 600 species of fish and is a famous eco-tourism destination in the Philippines! The several snorkeling and diving spots of this island are a delight to the divers!

MassKara Festival, a much-awaited festival in the Philippines, draws many international tourists to Bacolod in the month of October! The joyous celebrations include street dance competitions, float parades, food festivals, musical concerts, beauty pageants, and much more. The arresting dance performance wherein the revelers wear resplendent smiling masks and dance to the live beats reflects the true spirit of the City of Smiles!

The allure of this Spanish colonial town lies in its well-preserved old-world aura, which is the reason why Vigan (a UNESCO World Heritage Site) attracts a lot more tourists than just history buffs. Vigan’s cobble-stoned streets, colonial architecture, centuries-old churches, Spanish-influenced cuisine, and heritage museums give you a glimpse of the bygone era and its strong influence on the present day’s Vigan!

The paradisiacal island called Palawan is one of the unmissable places to visit in the Philippines. Consisting of a number of smaller islands and islets, Palawan is rich in biodiversity and is called the ‘Last ecological frontier’ in the Philippines. The enchanting beauty of the rock islands, limestone cliffs, caves, lakes, and natural parks of Palawan is truly a sight for sore eyes! El Nido, Puerto Princesa, Coron, and Tubbataha Reefs Natural Park are the most popular tourist destinations in Palawan, perfect for both leisure and adventure! Pre-plan your Palawan trip, and the alternate date deals offered by iEagle help you save huge on flight tickets!

Previous article
Check out the five most useful tips for surviving long haul flights in economy class.
Next article
Go offbeat and explore these three hidden gems in Luzon Island