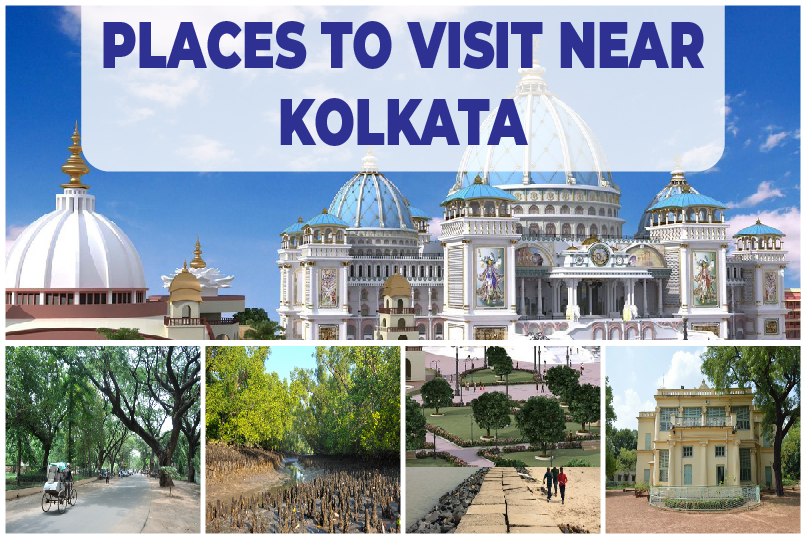 Being the capital of the Indian state of West Bengal, Kolkata (called Calcutta, until 2001) is the primary hub of commercial, financial, and business importance in eastern India. It is also the main center of communication between northeastern India and the rest of the country. There are some amazing places to visit near Kolkata that you could visit with your partner.

Kolkata was initially a series of three small villages in the area of medieval Bengal, ruled by the Nawabs in the 17th century. The British, in their bid to colonially control India, defeated the nawabs and built a fort around the three villages, now called Fort William, for their own purposes. It eventually became the capital of British India, until the year 1911, when the status of capital was shifted to Delhi.

Nevertheless, right until the British left the country in the year 1947, Kolkata had been the center of the Indian independence movement. Today, it is known to be the cultural capital of the country.

Thinking of a trip to India with your partner? Read on to find out about some of the great places to visit near Kolkata.

Located at a distance of 180 km, Digha is a beach town in West Bengal. It is most known for its high-tech research centers and museums, fabulous temples, and incredible beaches—one of the most amazing tourist places to visit around Kolkata. The most recommended site to visit is the Temple of Chanadaneshwar.

Digha has some great scenic views if you’re one who loves to take photographs. Some great sites to visit in Digha are the Aquarium of the Zoological Survey of India, the Talsari Beach, and the Amarabati Park.

Known to be one of the best forest places in India, the Sundarbans is one of the places around Kolkata that is 115 km away. This place has a perfect ecological balance. One statistic suggests that there are around 200 Bengal tigers living in the Sundarbans!

Besides the tigers, you can even witness rhesus monkeys, wild pigs and boars, deer, chital, etc. Sundarbans is known for being home to the biggest mangrove forests in the world, so far! Also being home to a variety of birds and animals, Sundarbans is a UNESCO World Heritage site.

Some great sites to visit here are the Sundarbans National Park, Sajnekhali Bird Sanctuary, and Marichjhanpi. You can take a boat tour around the mangroves and go on a river cruise.

One of the most amazing places every Kolkata travel guide book features is Mayapur.

Being 112 km from Kolkata and situated between the Ganga and the Jalangi rivers, this place is generally calm and quiet, away from the buzz and bustle of city life. You can come here to spend some peaceful time with your partner, forget about your careers and deadlines, and just enjoy the bliss of calm and peace.

Mayapur is actually a popular center for Vaishnavism in India, founded by the Bhakti saint, Vinod Thakur. Vaishnavism is a section of Hinduism that holds devout faith to Vishnu, the preserver god and one in the triumvirate. Some great sites to visit here are the ISKON Chandrodaya Temple, Sri Chaitanya Math, and Chand Kazi Samadhi.

Located a little over 160 km, Santiniketan in West Bengal is known to few. It is mainly a place where you can visit Rabindranath Tagore’s home and the institute his father founded—Vishwa Bharati University. In his prime days, through Vishwa Bharati University, he brought in a radical change in the system of education and the imparting of knowledge.

Santiniketan is a quiet place and well-loved by Rabindranath Tagore since his childhood, when he used to run around and play among nature. It was here that, when he grew up, he was inspired to teach future generations of students by letting them be in touch with nature – thereby, bringing back the ancient Indian Gurukul system.

This is one of the best tourist places to visit near Kolkata. Located about 150 km from Kolkata, Bolpur is said to be one of the most populous cities in the country. It is right next to Santiniketan and is famous for Vishwa Bharati University.

These are the most wonderful places to visit near Kolkata when you are tired of city life and seek the peace of the country. Contact Indian Eagle to book your flights to Kolkata now!

Previous article
6 Tips to Ease Travel Sickness on Planes
Next article
Nothing Phone 1 Releasing on 12th July: Know All About It Here!