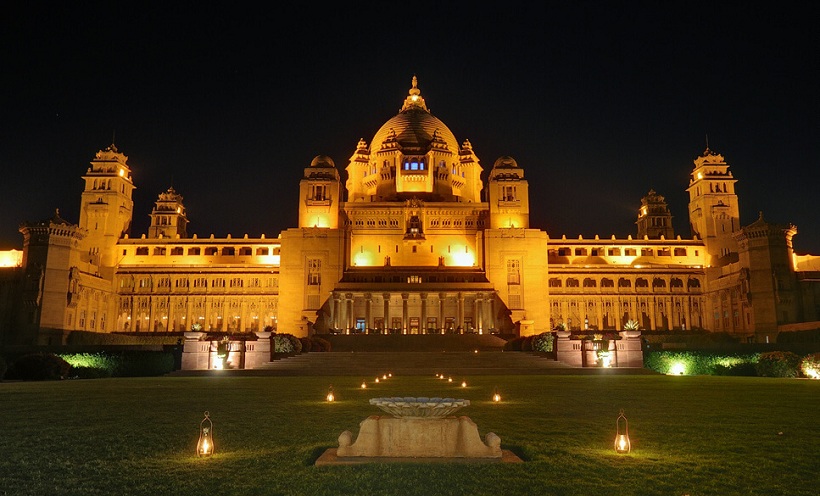 The rich cultural heritage of India is clearly depicted in the royal palaces of the country dating back to the times of Maharajas and Kings. If you want to understand the creativity, elegance and style possessed by the craftsmen of the ancient times, explore the royal palaces in India. It is a true representation of the legendary past of the Maharajas ad various dynasties that ruled the Indian soil. Today, some of the ancient palaces have been turned into 5 star hotels and resorts offering great luxury in an attractive package. To get the taste of the best royal palaces in India, spend a night or two here. The list of palaces in India is right here in this post. Keep reading.

Originally owned by the warriors of the royal family in Mysore, Mysore Palace is a perfect example of exquisite architecture that combines the styles of Rajput, Gothic, Hindu and Muslim craft. Planned by a European architect, the beautiful 3-storey stone palace was completed in a time period of 15 years. You can see the courtyards, elegant Durbar Hall, the Royal Gallery of Portraits and Art, lake gardens and the pre-historic Doll Pavilion. There are 12 temples inside the palace along with other great buildings. The most appropriate time to visit is on Sundays and on a public holiday as the palace is illuminated with lights in the evening. To visit the royal palace this winter, you can book last minute flights to Bengaluru and experience its charm and elegance.

Constructed over a vast area of twenty-six acres, this huge palace in Jodhpur has 347 rooms making it the largest private residence in the world and one of the top 10 biggest palaces in India. The meticulous architecture dates back to the 1940s having a fantastic opening of Western art décor and classical Indo-Saracenic design. An area of around 64 rooms is now turned to a royal heritage hotel owned by the Taj Franchise owners. You will find a museum with original antiques of the royal family including the Kings’ personal stuff. The personal belongings of the kings include the old portraits, classic cars, wild cat exhibits, different shapes and sizes of clocks and memorabilia.

Being considered as the royal hunting lodge of the former King of Jaipur, the Rambagh Palace was turned into a hotel back in 1957. Again, it is the Taj Group of Hotels that runs the heritage hotel having luxurious suites and rooms, representing the historical royal era in every corner, marbled corridors and offering luxury amenities. If you want an ultra-special experience at the 19th century palace, go for a peacock suite giving you a view of the Mughal terrace and lush green garden.

One of the oldest palaces in India, Chowmahalla Palace was the royal house of the Nizams of Hyderabad in the 19th Century. It has four palaces separated as northern and southern courtyard. The northern courtyard consists of fountain pool and Bara Imam – corridor to the palace rooms. You can observe the perfect amalgamation of Mughal and Persian architecture. The four palaces are in the southern courtyard featuring the neo-classical architecture. It is the Durbar Hall or Khilawar Mubarak, where all the ceremonies, gatherings and events of the royal family took place. See the centuries old belongings of the Nizams when on your next business trip to Hyderabad. Your business class flights will prove worthy enough as you get to observe the royal lifestyle at Chowmahalla Palace.

Formerly owned by the Nizam of Hyderabad, the Falaknuma Palace was turned into a luxurious hotel in the year 2010 and now runs under the Taj Group of Hotels. People visit the palace to observe the glory of the Nizams of Hyderabad. Situated at a height of 2000 feet atop a hill, the hotel overlooks the City of Pearls. The Palace turned hotel holds great reputation for its Venetian chandeliers, selective interiors, marble staircases, meticulous furnishing, intricate statues, roman pillars and artworks. The Rajasthani, Japanese and Mughal gardens give an alluring view to the guests. There’s also a large library exhibiting one of the typical versions of Quran, the holy book of Islam.

Set amidst the beautiful Pichola Lake in Udaipur is the Lake Palace constructed for the Mewar Rulers in the 18th century. It was once the winter palace for the royal families of Mewar Dynasty but today, holds a great reputation of a heritage white-marble hotel owned and managed by the Taj Group. There are 83 suites and rooms, decorated beautifully keeping in mind every minute detail. Considered one of the most famous palaces in India, it is a perfect romantic and royal stay for couples. Do not forget to go for the Rajasthani-style boat ride in the Pichola Lake.

If you are all set to taste the royalty, India is the place to explore. Visit the top royal palaces in India some of which are still owned by the Kings, some now a heritage hotel and others turned into renowned museums.