The Best of Traditional Indian Dishes Served Up for You, Food Lovers! 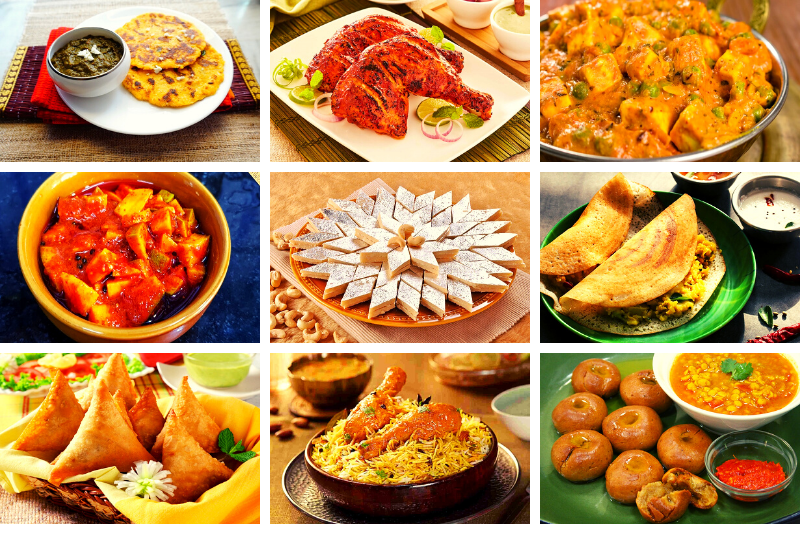 India is a country that overwhelms travelers with its diversity in terms of landscapes, cultures, traditions, languages, and also cuisines. With the culinary scene changing not only from state to state but also from region to region within a state, this remarkable gastronomic destination unlike any other on this planet lures you into its world of spicy, flavorful, and hearty goodness. Moreover, India’s dietary classification (sattvic, rajasic, tamasic food) based on the ancient philosophy (and science) of Ayurveda is as fascinating as its complex culinary culture that has greatly evolved under the influence of various rulers.

This article serves up the best of traditional Indian dishes for every food-loving traveler out there planning to book flights to India for a culinary tour of this country. Here we go!

A staple food of every Punjabi household, Makki ki Roti (flat unleavened corn flour bread) and Sarson ka Saag (gravy dish made with mustard greens) is a match made in culinary heaven. This highly nutritious traditional Indian dish is quite popular across North India. It may not appeal to your eyes, but it surely does to your taste buds. Topped with a generous chunk of makkhan (butter) or a dollop of desi ghee, Makki ki Roti and Sarson ka Saag are traditionally served with a fulfilling glass of lassi.

Creamy, colorful, and spicy; Matar Paneer is a delicious North Indian curry that you must try. Fresh peas (matar) and soft paneer (Indian cottage cheese) cubes are cooked to perfection in rich, luscious gravy of onion, tomato, and cashew nuts, and spiced up with garam masala. It is best enjoyed with either naan or paratha.

The royal Rajasthani cuisine dishes out lip-smacking delicacies whose flavors range from sweet to spicy. One of its classic treats that features on a typical Rajasthani Thali is Dal baati churma, a three-in-one meal composed of spicy panchmel dal, deep-fried and crunchy baati (wheat dough balls) dipped in desi ghee, and semi-sweet churma (crushed and sweetened baati). Crush the bati, pour piping hot dal, douse it with ghee, and enjoy this traditional Indian dish. Finish it off with the sweet churma!

Hyderabadi Biryani is one such indulgent Indian food that awakens your taste buds with its rich flavors. Biryani has long been the favorite dish for many and the Hyderabadi version is an all-time classic, thanks to Nizams of the city whose unique cooking style (combining the elements of Hyderabadi & Mughlai cuisines) introduced the best biryani to the world. Dum Biryani is only one of the many delectable dishes that this UNESCO’s ‘Creative City of Gastronomy’ has to offer foodies flying down to Hyderabad.

A staple South Indian breakfast, Dosa is popular throughout the country, if not the world. A ladle full of dosa batter (fermented rice and lentil batter), when spread out evenly on a round frying pan and fried until crisp, becomes the paper-thin dosa – an Indian pancake similar to a crepe, typically served with various chutneys. Of all the varieties of delicious dosas, masala dosa stuffed with a spicy mixture of mashed potatoes and onions is the most famous, and hence, a must-try traditional Indian dish!

Pickling is more than a preservation process in India. Seasonal fruits or vegetables, including mangoes, lemons, and amla, are pickled in a complex and careful process using a melange of spicy powders and other ingredients whose flavors blend in so well over time resulting in a fiery but tasty condiment that is enjoyed by Indians every day until the next season. No traditional meal in India is complete unless accompanied by a spoonful of pickle that fires up your taste buds with an explosion of flavors.

A timeless classic, Indians’ love for this stuffed snack is eternal. The triangular puff with a crunchy crust and savory fillings comes with a variety of stuffing, from veggies to meat. Traditionally, samosa is filled with aloo (potatoes), onions, peas, corn, or lentils, deep-fried in oil, and served hot with mint/ tamarind chutney or tomato sauce. Samosa is also a perfect chai (tea) companion and relishing this delicious duo on a rainy evening makes things all the more delightful!

One of the much-loved traditional Indian dishes, Tandoori chicken makes your mouth water with its fiery red hue, thanks to the Kashmiri red chili powder used in its making. This is basically chicken marinated in a pool of aromatic spices and yogurt and barbecued in the Indian style – in a traditional oven called tandoor. The slightly-charred, smoky, and succulent Tandoori Chicken goes well with both basmati rice and naan and it is an absolute must-try.

Have a sweet tooth? Indian desserts leave you spoilt for choices! Kaju Barfi is probably the most famous, particularly when it comes to the celebration of special occasions and festivals in India. Kaju is a Hindi word for cashew nuts and barfi is a type of lozenge-shaped fudge. This traditional Indian sweet is commonly made from milk, cashews, sugar, cardamom powder, and ghee. Rich and creamy; the melt-in-mouth Kaju Barfi decorated with a layer of edible silver foil is a chunk of irresistible temptation!

Out of the many initiatives the state government has made to boost Gujarat Tourism, Rann Utsav is the most popular and lively one. A...
Food

10 Best Places to Eat in Seattle

Seattle may not first come to mind if you think about gastronomic delights in the US. But if you are in the city, be...
Food

You Cannot Leave Without Trying This List of the Best Street Food in Hyderabad!

Popularly known as ‘the City of Pearls’, Hyderabad is flocked by thousands of tourists every year, seeking to glimpse the world famous Charminar and...