10 Superb Places to Visit in Tripura 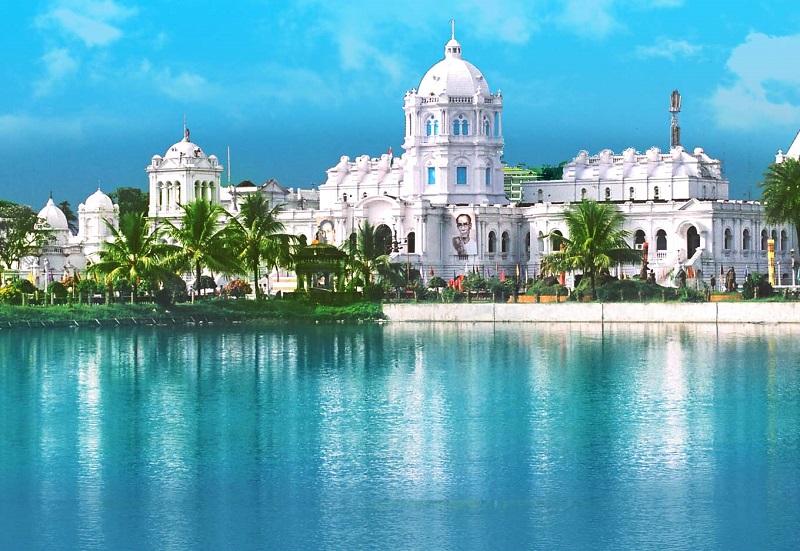 Tripura is considered as the wonderland in the lap of Himalayas. Being a small state province in India, Tripura is known for its deep valleys, noisy cataracts, running rivers and streams. The thick forests are home to wild animals like bears, elephants, leopards, dear monkeys, apes and wolves. Talking more about the beautiful state, there is a lot more for you than the exotic wildlife – its architectural marvels such wall sculptures of the historical monuments. Even though it has been a ravaging time for the old historical buildings over time now, they are still a major point of attractions for tourists from across the world.

From the Neermahal Palace to Ujjayanta Palace, we have mentioned the top places to visit in Tripura at least once in a lifetime.

To top the list is the famous Ujjayanta Palace, located 10 kilometers from the city of Agartala. A massive earthquake back in 1897 led to the destruction of this beautiful place which was reconstructed in 1901 by King Radha Kishore Manikya. The main attraction of the palace is the beautiful Mughal garden comprising of artificial lakes, verdant lawns, musical fountains and the royal majestic ancestry. If you are planning to take the Tripura tourism package, make sure this palace is included in the itineraries before you book your last minute flights to the nearest airport.

Nestled amid the Rudrasagar Lake, the Neermahal Palace is one of the must visit tourist attractions in Tripura. It was given the name Neermahal Palace meaning ‘water palace’ for its central position in the lake. It is one of the seven wonders of India founded by Martin & Burns Co. and consists of a courtyard, playing room, guest rooms and the royal Antar Mahal.

Unakoti in literal sense means, one less than one million and it is the exact number of murals and rock carvings of Hindu deities available in the pilgrimage. It is a Saivite pilgrimage where Goddesses and Gods are carved (stoned) on Lord Shiva’s curse. Make sure your Tripura tourism package includes this historical structure in the itineraries.

The sacred Jagannath Temple is located in the center of Ujjayanta ground. The temple’s design is a combination of both Islamic (on the outer walls) and Hindu (in the interior) styles. If you are an avid traveler and have interest in spirituality, you must be aware about the existence of Lord Jagannath as an incarnation of Lord Vishnu and is worshipped with Lord Balabhadra and Devi Subhadra alongside.

In the year 1970, Tripura culture and heritage got a new place for exhibition called the Tripura Government Museum. If you go through the Tripura tourism map, the museum is one definite spot you will trace on it. The museum comprises of the old-age rare collection of archaeological objects and stone carvings of Tripura, some gold coins and other valuable things. Any traveler can have the clear evidence of the past and present lifestyle of Tripura as he/she explore the museum and the exhibits.

The Sipahijala Wildlife Sanctuary covers almost 19 kilometers of the area and is home to wild creatures, orchids, around 150 different species of migratory and local birds, etc. It offers an elephant ride to the visitors and has rubber and coffee plantation and many more. Another unique attraction in the wildlife sanctuary is the spectacle monkey. No matter if you have booked business class flights to Agartala for the upcoming conference, you can spare a weekend to explore wildlife.

A silently set recreation ground in the southern area of Raj Bhavan is the Rabindra Kanan. It is a vast ground with wide varieties of flowers and rich frondescence that make it one of the favorite places of the young and teenager tourists visiting Tripura. Along with the mesmerizing flowers, the major attraction of the Kanan is the “Puppet House.”

Situated at Gurkhabasti in P.N Complex, Nehru Park is among the calm and peaceful spots in Tripura. The lush green beauty and exotic garden of the park attracts several numbers of tourists every day. The artworks, statues and wide range of flowers make it one among the best spots for youngsters and lovers to have a peaceful time amid nature.

Located 200 kilometers from Agartala, the capital of Tripura, is the famous Jampui Hills. Being the highest ranger bordering the lines of Mizoram, it offers the traveler some awe-striking views and highly pleasant climate up on the hills. It’s not just all about the climate up above, but the orange orchard, grassy foliage and sunrise point & sunset point allure the visitors all year round.

The Rose Valley Amusement Park is situated in Amtali, Madhuban, only a short distance from Agartala city. This park attracts thousands and thousands of travelers with its myriads of entertainments and amusements all four seasons. To complete your tour of Tripura, do not skip this park.

Now you know what Tripura is famous for? Cover all these places to visit in Tripura and let us know the experience.

Previous article
7 Biggest Travel Mistakes Not to Make!
Next article
8 Best Places to Celebrate New Year’s Eve in the USA