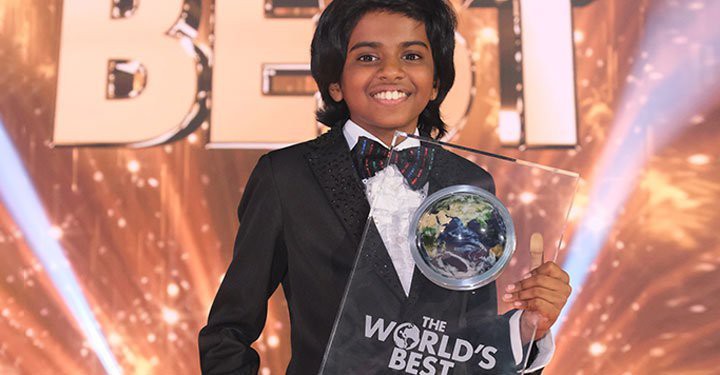 India has seen many a great musicians and the latest name added to the list of prodigies is of the 13-year old piano master, Lydian Nadhaswaram. Living in Chennai, Lydian made his parents and the country proud by winning the title of “The World’s Best”, a global talent contest hosted in The United States on March 14th, 2019. He brought home the prize money of $1 million.

His impeccable performance at the show finale made the host, James Corden tweet, “This is genuinely one of the best things I have ever seen live”.

The 13-year old genius did wonders during the contest that amazed the judges and audience, right from the audition round. He played ‘The Flight of Bumblebee’ by Rimsky-Korsakov at three different tempos, the third and the highest being 325 beats per minute which is twice the original beat of the song. Getting through to the second round (The Battle Round), Lydian played a piece from Fantasie Impromptu by Chopin and Rondo Alla Turca by Mozart. The second number was played blindfolded. His stupendous performance got him into the finale, The Championship Round leaving behind the other 26 contestants of the 28 contestant contest.

In the finale, he competed against Kukkiwon, an adult Olympic level crack taekwondo team of 27 members from South Korea. Undoubtedly, the Koreans took the stage by fire with their stunning performance but music reached out faster and Lydian, the little pianist with terrific style won the title. Lydian Nadhaswaram’s family was the proudest, his father, mother and an elder sister.

Lydian started learning music seriously from the age of 8 years, though his ineptest started building up seeing his father, Varshan Satish, a music director in Tamil film industry and his elder sister playing on stage. He says his first piano teachers are his father and sister. When he was 8, he joined A.R. Rahman’s music school where he trained for 4 years before participating in The World’s Best contest.

He creates his own music and is presently focusing on his technical skills of sound systems and mixing sounds. His success in the United States got him the chance to sit across the famous Ellen DeGeneres in her show.

Now, it’s no more turning back for Lydian.

Air India Express owned by Tata Sons might now see a new addition of four Boeing 737 airplanes in its fleet. At present, the...
News

You may be wondering if refugees are admitted to the United Kingdom based on their race or social group. Well, this article will discuss...
News

Authorities at the Bengaluru International Airport Limited (BIAL) made an announcement on Wednesday, i.e, 22nd June that Bangalore Airport is all set to start...