World Sanskrit Day – विश्वसंस्कृतदिनम् – is about celebrating an old language. A salutation to its ancient origins.

A bow in reverence to the language that is often termed as the ‘language of the Gods’.

Sanskrit is always included in the world’s top oldest languages list. The top position is heavily debated and several scholars reference sources pointing it out to be Sanskrit or other languages such as Hebrew, Greek, Egyptian Tamil, Farsi, and others (not in any order). But the top position is irrelevant in light of what Sanskrit has been and stands for in context of India and its holy texts and history.

Rig Veda is considered to be the oldest text in the world, which is written in Sanskrit. So, here’s an homage to Sanskrit on World Sanskrit Day via some Rig Veda Hymns.

ऋग्वेद – 10:129 is the hymn in the last mandala (section in the text). It is about ‘origins of the universe’ and it is often called the ‘hymn of creation’ and starts this way:

It talks about how no one knows about ‘the’ existence of the universe and the Gods and what was before it and why the universe exists. It is contemplative and doesn’t offer any answers. The actual translation of all the Rig Veda hymns exists in many languages including Hindi and English. 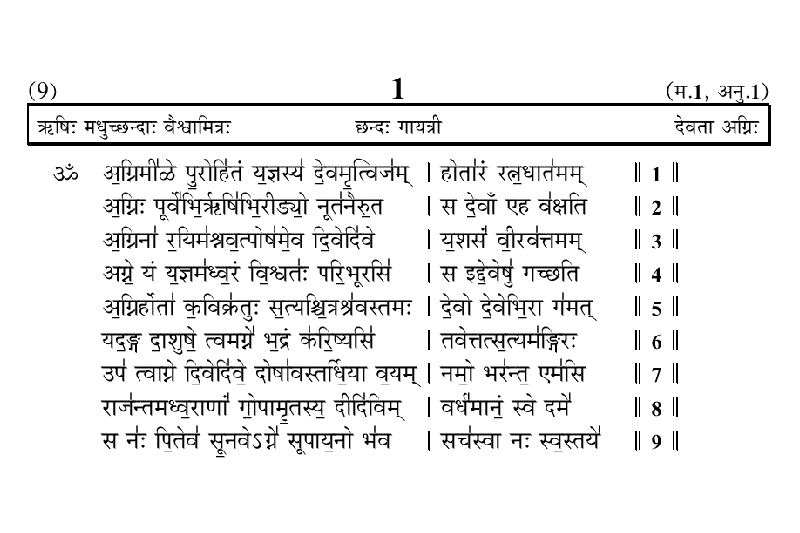 Hymn 1:1 is addressed to the Fire God – Agni Dev. The first word in Rig Veda apparently is the name of this deity. It is one of the most famous Rig Veda Hymns.

This hymn is an adulation to Agni Dev as the warrior who sees the truth and some other praise. This hymn is an invocation to this deity as the one who is powerful and pure. The first invocation is to him as he stands for the destruction of all that is not righteous; because he can stare into the truth even if it is blazing.

Much of India’s ancient text such as the four Vedas, Upanishads, Puranas, and others are in Sanskrit. Vedic Sanskrit is considered markedly different than Classical Sanskrit due to the evolution of the language over the centuries. Sanskrit is still taught in several prestigious universities across India such as JMI in New Delhi, BHU in Uttar Pradesh, University of Delhi in New Delhi, Pune University in Pune etc. Many international scholars and those passionate about languages travel to India to study Sanskrit or old texts written in this language.

A note on World Sanskrit Day: It was first celebrated in 1969 and the full moon day in the month of Shravan has been dedicated to it, which is also the day of the Raksha Bandhan (depending on the time and date as per the Hindu calendar). This year, the day falls on 12th August (the full moon time is 11-12 August). Students in ancient gurukuls had to wear a scared thread before they could study the vedas; signifying the purity of the language and the scaredness of the texts.

The purpose of the celebration is to keep the spirit of Sanskrit alive. The government of India organizes several events on this day such as seminars, lectures etc.

The first thing that comes to mind when thinking of Rajasthan is Udaipur's strong forts and opulent palaces. These opulent palaces in Udaipur spell...
News

Japan’s supremacy continues for the fifth consecutive year in the Henley Passport Index, a global ranking of 199 passports based on their strength, which...
Culture

The week-long International Kite Festival began on a cheerful note in Gujarat’s Ahmedabad on 8th January 2023, setting off the festive vibe as the...
News

On one hand, Bengaluru Airport's recently inaugurated Terminal 2 is gearing up for the commencement of flight operations from 29th December 2022 and on...