Lama Temple – Feel the Essence of Spirituality in Beijing 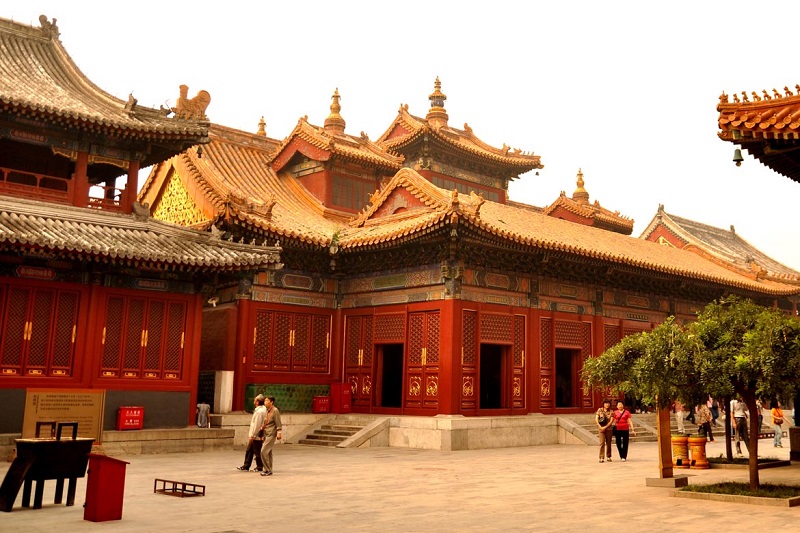 Lama Temple is a unique place of worship shining bright among the Buddhist attractions in Beijing. If you’re planning a trip to the Red Dragon then you will need some China travel tips along with a good understanding of the Lama Temple.

If your plan is to visit only one temple while exploring the capital city, be it the Lama Temple. Its fantastic frescos, enchanting roofs, tapestries, awe-striking carpentry, decorative arches, tantric statues, magnificent Tibetan prayer wheels and the amazing pair of Chinese Lions make it a must-visit place in Beijing.

Once you’ve read about the beauty of this temple you will be rushing to book cheap flights to Beijing. If you have any doubts, here’s everything you should know about the temple. Read on.

The temple is situated towards the northeast of Beijing at No. 12 Avenue, Temple of Harmony, North-South Street. You can reach there by bus – Bus 12, 116, 406 and 62 run on the route. If you want to take the subway to Lama temple, you can get one going to Yonghegong station. Here are some tourist places to visit in Beijing for a wholesome vacation.

Built in the year 1694 by Emperor Kangxi of Qing Dynasty, the temple was a residence of his son Prince Yin Zhen who later moved to Forbidden City taking a new name Yong Zheng on his succession to the throne in 1723. He renamed his old residence (Lama Temple) as Palace of Harmony. The green ceramic tiles were also replaced by yellow ones giving it an imperial look. Later in 1744, his successor, Emperor Qianlong got the palace turned into a lamasery. The lamasery was offered to the Tibetan monks who gave it the name Lama Temple.

Lama Temple – Its Architecture and important buildings in the complex

The temple was constructed with the ancient architectural designs with every element being symmetrical. The main halls are on the north-south axis with the wing halls on the sides. This masterpiece is a combined work of different architectural styles of the Manchu, the Han, the Tibetan and the Mongolian. It has a courtyard in the south. One of the many Lama Temple facts is that it contains five main halls in different courtyards in its north.

This is all you need to know about the marvelous Lama Temple, so plan a trip to Beijing to see this stunning monument up close. Below mentioned are the five main halls in the temple courtyards that you must visit:

Hall of Heavenly Kings: This one is just an entrance to the four other main halls. There are Sanskrit bells hung on the corners and some mantras are written on the door lintels that give it a religious atmosphere. It is given the name, Hall of the Heavenly Kings because there are shrines of four heavenly kings inside the hall. You will also find a statue of Maitreya in the center of the hall.

Hall of Everlasting Blessings: In the adjacent courtyard is the Hall of Everlasting Blessings which was the residence of the Prince. This hall comprises of the Medicine Buddha, Amitabha and Lion Buddha with two depictions of Green Tara and White Tara on the sides of the wall. You will find the Green Tara picture is a little unusual, made of more than 4000 silk pieces of different colors and shapes.

Suggested Read: Things to know before moving to china

Hall of Dharma Wheel: This hall is the place where the lamas read sutras and organize ceremonies. A statue of the father of the Yellow Hat Sect (of Tibetan Buddhism), Tsong Khapa is housed in the hall. Right behind the statue lays an excellent woodcarving that looks like a hill. The woodcarving comprises around 449 Arhat statues. You will get all the information about the life of Sakyamuni from the mural on the wall. You can also find some important Buddhist scriptures preserved for years which include the Gangyur of Tripitaka. There are assistant halls that enshrine 5 Heavenly Guardians.

Pavilion of Infinite Happiness: The last main hall is the Pavilion of Infinite Happiness which is the highest in the Lama Temple.It is a three-storey building having two small pavilions. The mail hall enshrines a statue of Maitreya presented by the seventh Dalai to Emperor Qianlong, successor of Emperor Yong Zheng. The statue is of the height of 26 meters, diameter of 8 meters and 8 meters of it is buried in the ground. It is carved using a rare sandal tree. Carved with 99 lifelike dragons is another niche for Buddha in the assistant hall.

South Courtyard: Talking about the South Courtyard, there is a wall screen and 3 tall Pailous at the entrance of the building. When you walk through the imperial way, you will see the Zhaotai Gate that leads to the North yard. A drum tower and bell tower stand in the west as if greeting the visitors.  Now that you’ve gotten a quick summary of what to expect at the Lama Temple, pack your bags and book tickets to China. If you need an easy and reasonable way to fly, check out iEagle.