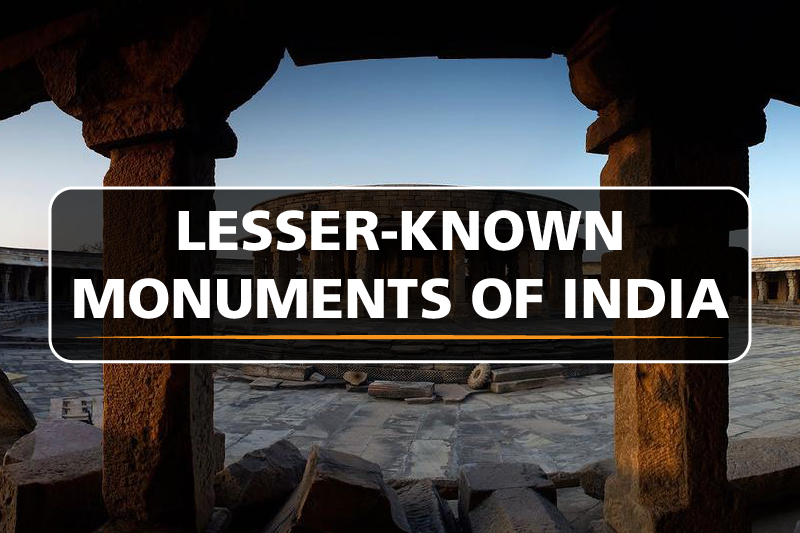 One of the ancient civilizations of the world, India is a country with a rich historical and cultural heritage. If you take a look at India’s past, you will discover that this was a nation that every ruler wanted to get his hands on. The several dynasties that ruled the country left a mark on this land, and the monuments that they constructed during their time are tangible evidence of their influence on the country. These monuments built during the Gupta, Maurya, Chola, Chalukya, Vijayanagara, Maratha, Mughal, and various other empires are some of the famous attractions in the country today.

Lesser-known monuments of India are many; probably much more than the country’s well-known monuments. Here is a list of 5 of the least-explore monuments in India, which deserve your attention.

Located in the heart of Jaisalmer, Salim Singh Ki Haveli is a majestic building, whose architecture takes your breath away at first sight. A mansion built on the remains of an ancient haveli, the ground floor is rather unpretentious, but the upper floor is something that arrests your attention! The 38 ornamental balconies, beautiful brackets designed like peacocks, and pale blue cupolas on the top make it clear that the architectural inspiration for this haveli is a dancing peacock. Not just its architecture, but the way this haveli was constructed is also unique, as in the stones were held together with the help of iron rods.

Set amidst manicured gardens complete with fountains, Marble Palace is a stunning mansion with Corinthian columns built by an affluent Bengali merchant called Raja Rajendra Mullick in the 19th century. As can be inferred from its name, this is a magnificent palace built entirely out of marble, to be precise, over 125 types of marble sourced from different places. Its typical neoclassical architecture is fused with traditional Bengali elements, reflecting Rajendra Miullick’s refined taste for art. The heirs of the royal family still reside here, but visitors are allowed to take on a tour of this lesser-known monument of India and explore the vast collection of paintings, portraits, sculptures, and other artworks housed in the halls of the palace.

One of the lesser-known monuments of India, the Unakoti stone carvings are marvelous works of art. The thousands of rock carvings, murals, rock-cut images, and bas reliefs located in Unakoti are estimated to belong sometime between the 7th and 8th centuries. It is said that there are 9,99,99,999 carvings in total, and in fact, the name of this place, Unakoti, which means ‘one less than a crore,’ also refers to this. Some of the awe-inspiring monuments include the 30-ft-tall Unakotiswara Kal Bhairava, a huge Ganesha, and Goddess Durga carved out of the hillside. Unakoti has spiritual significance too as it is believed that Lord Shiva rested here for a while, on his journey to Kashi.

Replete with several ancient forts, palaces, temples, mosques, tombs, and historical ruins, Bidar is known as the ‘City of Whispering Monuments’. Bidar Fort is a must-see if you are traveling to this place. Although most of the fort is in ruins now, a tour of this vast complex which contains within itself more than 30 monuments is worth it! Bidar Fort is popular with tourists from Karnataka and the surrounding states, yet it is one of the lesser-known monuments of India. Situated less than 150 km from Hyderabad Airport, Bidar is a popular weekend getaway from the city.

The city of Agra boasts many monuments that are considered some of the finest examples of Mughal architecture in India. While the Taj Mahal and Agra Fort are recognized all across the world, a few other monuments like the Kanch Mahal still remain largely unexplored. Located close to Akbar’s Tomb, Kanch Mahal is a square-shaped structure originally constructed as a residence for the royal ladies of the Mughal dynasty. It got its name from the gorgeous tile work that adorns its facade made of red sandstone. Kanch Mahal is surrounded by a beautiful garden that has water channels, tanks, etc.

You can explore more lesser-known monuments of India such as Bada Bagh in Jaisalmer, Maluti Temples in Jharkhand, Basgo Monastery in Leh-Ladakh, and Undavalli Caves in Andhra Pradesh, and Rabdentse in Sikkim. Plan your trip now and your flights to India via Indian Eagle to save huge on airfare. You can earn reward points too!