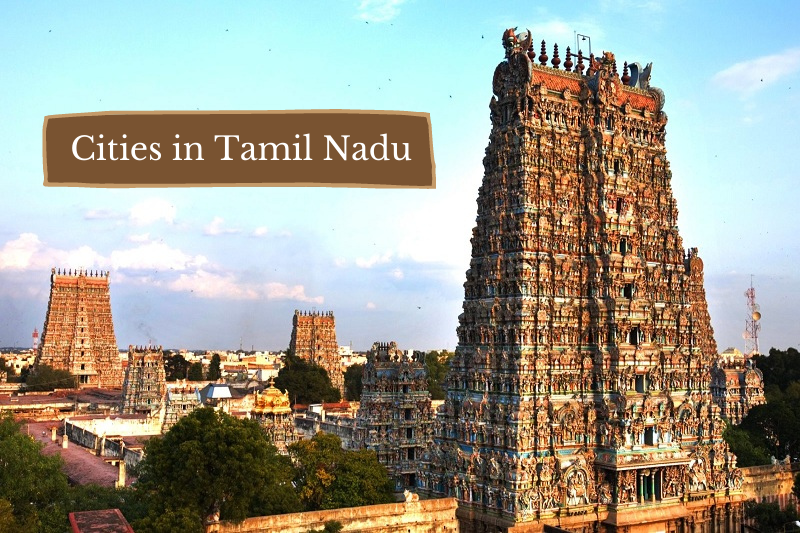 The land of colorful Dravidian temples known for their mind-bogglingly intricate architecture, the land of classical Bharatanatyam dance, the land of rich history and culture, the land blessed with lush mountain ranges, sunny beaches and scenic hill stations, Tamil Nadu caters to tourists with different kinds of interests. Tamil Nadu has witnessed the rise and fall of several historical dynasties, each of which left behind a mark on its culture, traditions, art, architecture, as well as cuisine. The vibrant cities in Tamil Nadu, while flaunting a modern makeover, stick to their cultural roots in the simplest manner, and this quality is what makes them quite appealing to tourists.

This South Indian state on the Coromandel Coast was also listed among the top places to visit in the world in the New York Times 2016’s edition. Planning your first Tamil Nadu trip? Make a note of these top tourist places to visit in Tamil Nadu, pack your bags, seize on the exclusive flight deals at Indian Eagle, and fly down South for a memorable holiday.

A bustling metropolis with a long history and great cultural heritage, Chennai (or Madras) is among the most visited Indian cities by foreign tourists. It enchants tourists with its numerous British Raj buildings, glorious ancient temples, churches, pretty parks, sandy beaches, museums, art galleries, lip-smacking South Indian delicacies, and entertainment and shopping avenues. Boasting a rich legacy of traditional arts, music, dance, and theatre, Chennai vies with Kolkata for the title of the ‘Cultural Capital of India’.

Coimbatore: Manchester of the South

Coimbatore, famous for its flourishing textile industry, is a major manufacturing hub in the South. Despite being one of the most industrialized cities in Tamil Nadu, Coimbatore impressively preserves its natural wealth of lush green mountain ranges, dense jungles, beautiful rivers, streams, and waterfalls. From nature to adventure, wildlife to spirituality, food to shopping, there’s something for everyone at Coimbatore, also called Kovai. It also enjoys a pleasant climate for the most part of the year, courtesy of the long Palakkad gap in the Western Ghats. So, there’s no wrong time to visit this place. As for the availability of cheap flights to Coimbatore, you can’t go wrong with Indian Eagle.

Madurai is synonymous with Meenakshi Amman temple, one of the outstanding examples of Dravidian architectural finesse. Settled on the banks of the Vaigai River, this ancient city in Tamil Nadu steeped in history, culture and tradition is considered the soul of the state. As a popular pilgrimage destination housing several magnificent Hindu temples, Madurai has long captivated pilgrims, spiritually-inclined travelers, as well as history and architecture buffs. The towering gopurams of Madurai’s temples add divine beauty to its skyline. Join a heritage tour of this city to get a glimpse of its deep past.

Suggested Read: Top 6 Places to Visit in Madurai in 24 Hours

Udhagamandalam: Queen of the Nilgiris

Better known as Ooty, this scenic hill station nestled in the heart of the Nilgiris Mountains at an elevation of 2,240 meters above sea level is where holidaymakers rush to, seeking refuge from the scorching summers in Tamil Nadu. Refreshing views of lofty mountains, rolling tea estates, misty valleys, thick jungles, botanical gardens, serene lakes, rivers, and waterfalls greet you at every turn in Ooty. The toy train ride on Nilgiri Mountain Railways (a UNESCO World Heritage) is the best way to experience the natural beauty of this beautiful city in Tamil Nadu.

With its old-world charm and architectural marvels dating to the Pallava Dynasty, this historic city never fails to impress tourists. Renowned worldwide for its Group of Monuments that reflect the rich cultural and architectural heritage of India, Mahabalipuram or Mamallapuram (as it is locally called) is one of the must-visit cities in Tamil Nadu. Touring Mahabalipuram is like traveling back in time. Apart from its exquisite rock-cut monuments, rathas, mandapas, monolith temples, open-air reliefs, stone carvings, caves and sculptures, this coastal city is also loved for its silver sand beaches and casuarina groves.

Previous article
Places to Visit in India during Monsoon: Get Smitten by the Beauty of Rain-Drenched Landscapes
Next article
India At Tokyo Olympics: Medal Tally, Remaining Sports Events, Schedule and Medal Hopes