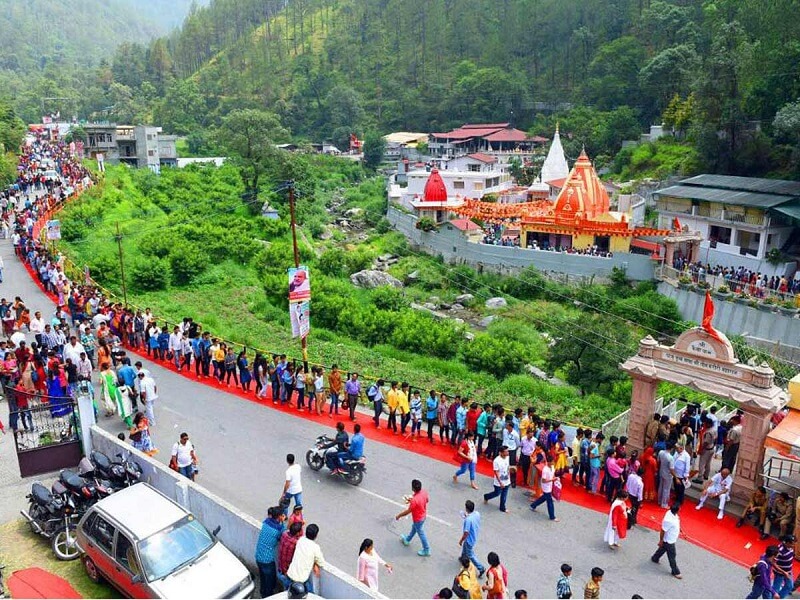 As Indians, we all know about the religious fair Kumbha Mela, but how many of us know that there’s another fair that attracts thousands and thousands of devotes from across the country and abroad? Yes, that’s right! it is the Kainchi Dham Fair in Uttarakhand that brings devotees together from different parts of the world. Why not become a part of the religious gathering this year? Here is everything you must know about the Kainchi Dham Fair 2019.

Why is Kainchi Dham Fair Celebrated?

You might have never thought that one of the most popular hill stations in the country, Nainital, is also the place of a religious fair. Not very far from the hill town on the Almora-Ranikhet National Highway, is the Kaichi Dham where the fair is organized every year.

Neem Karoli Baba, an Indian saint, also called Maharaj Ji, arrived at Kainchi Dham on May 24, 1962. On 15th June, 1964, Maharaj Ji established an idol of Lord Hanuman in the ashram and the day was marked as the Consecration Day or Pratishtha Divas. A fair was organized to celebrate the sacred event and since then, every year on 15 June, the Kainchi Dham Fair is celebrated with the same faith, devotion and enthusiasm. It is the best time to visit Kainchi Dham ashram.

Prasad is served to all the devotees visiting the ashram and no matter the number of devotees, the food has never fallen short. It is believed that Maharaj Ji himself takes care of the Prasad ad it is with his blessings that there has never been a shortage.

What is there in Kainchi Dham?

It was Neem Karoli Baba, who carved the first foundation of the Kainchi Dham ashram when he arrived to the location on 24 May in 1962. He was a great saint who established the idol of Lord Hanuman in the ashram. Every morning, devotees gather here for meditation and satsang (spiritual meetings) along with other kinds of devotional practices, karma yoga and various yoga-chanting practices.

The ashram is encompassed by high hills and mountains and perfectly manicured gardens that will leave you alluring the sight in awe. You will find several idols of the Hindu deities like Lord Ganesha, Goddess Durga Lord Hanuman and Lord Shiva (A Shivalinga), of which Lord Hanuman is worshipped as the main deity.

At the center of the Ashram is a takht or sacred seat for Neem Karoli Baba. The seat is covered by a plaid blanket, same as the one he used to wear. There is also a kitchen in the ashram where Prasad is prepared and served to thousands of devotees during the fair and other special occasions.

There is a beautiful garden within the Ashram boundary with various kinds of flowers planted and maintained by active volunteers. The ashram is spread in an area of 10 acres which has an orchard, two green houses, a dairy cow, peafowl, many bee hives and a large garden of medicinal herbs.

Who was Neem Karoli Baba?

The reverent Maharaj Ji or Neem Karoli baba was an Indian Saint who wandered to places. It is reckoned that he got this name from the place Neem Karoli where he stayed for quite some time. The beloved Baba is remembered for the unconditional love and blessings he showered on the visitors of the ashram and anyone he encountered. There is also a belief that Maharaj Ji could make connections with people he has never met in life, a power that took him beyond the physical plane.

His teachings are still followed and considered universal by the people of the area and his faithful devotees across the world. He believed in the concept of – Love Everyone, Remember God, Serve Everyone, All are One, Feed Everyone and Speak Truth. One of his teachings, ‘Feed Everyone’ became the main act of the Kainchi Dham Fair where no devotee is turned empty stomach. Everyone gets Prasad despite the large numbers (which is never fixed).

What is the easiest way to reach Kainchi Dham?